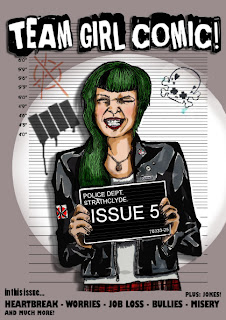 Back in May, Glasgow's Team Girl Comic collective began a Kickstarter campaign to raise the money to publish issue 5 of their title. Their target was $1000 (Kickstarter being a US site) and, remarkably, they reached it in five days flat.

Their Kickstarter campaign went on to raise over $1700 which allowed them not just to go ahead and print issue 5 but also to expand it from the title's usual 28 - 32 pages up to a remarkable 44. It also allowed them to get their sold-out back issues reprinted.

TGC issue 5 is now available and is an anthology featuring short comic strips by female writers and artists from a wide variety of backgrounds and ages, from absolute beginners to professional artists. 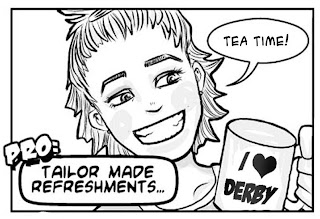 The issue includes many regular contributors such as Gillian Hatcher, Colleen Campbell (who created the front cover, above), Penny Sharp and Evy Craig as well as newcomers Amanda 'Hateball' Stewart (left), Elena Vitagliano and many others. It is available to buy now from the TGC website and will soon be available at Plan B Books in Glasgow, Deadhead Comics in Edinburgh, and Gosh! and Orbital in London.

The next event that Team Girl will be participating in is the Glasgow Merchant City Festival where they will be taking part in Comics Night at the Scotia Bar on 26 July 2012. They are planning to have an exhibition of their work, lots of drawing on the night as well as a comics-themed pub quiz.

Team Girl Comic editor Gillian Hatcher talked to downthetubes about the title here.
Posted by Jeremy Briggs at 7:00 am

That's interesting, I thought Kickstarter didn't operate in the UK but I see that's changed. Ta for that.