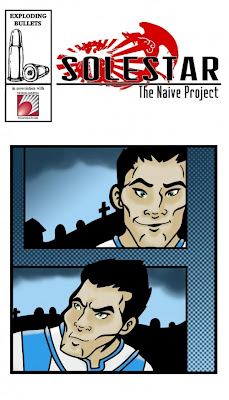 Brain aneurysm survivor Siike Donnelly is aiming to share his love for comic books, and his writing ability, to recruit artists for a very personal project that he hopes will save more lives like his.

30-year-old Siike (Seek) Donnelly, an American comic creator, survived a subarachnoid hemorrhage, commonly known as a brain aneurysm, in 2010. Having to rebuild his speech pattern and learn to walk again, he reached out to other aneurysm survivors, finding that very little is being done to not only raise awareness to something that could affect anyone at any moment, but also found very little money being raised as well. Today, he aims to change that.

"I'm one of the lucky ones," he says. "Most people don't survive a brain aneurysm, and of those that do, most suffer from disabilities.

"Though I have new daily obstacles, I want to take advantage of the world I'm connected to, and love more than anything, to help me raise awareness and funds through something as simple as a comic book."

In recent months, Siike has gathered nearly a dozen artists for his cause, even starting up his own company called The Naïve Project. Through his company, Siike will publish a comic book called Solestar, a Japanese character of his creation, who has an origin set during the bombing of Hiroshima.

"I wanted to create a superhero that knew loss right from the start, he explains. "It's kind of the staple when creating someone with powers. They have to come from tragedy to obtain victory. This is something I now understand on a personal level. Hopefully victory follows my tragedy with this project."

The concept is simple; Siike, a published author of two books, Rhino and Heaven's Echo, has written a 55-page story that focuses on Solestar's final Christmas Day on Earth, in 2099. He is asking for 55 artists from anywhere in the world to email him, read his script, and pick a page that they are willing to donate to the cause.

With a dozen artists already on board, including Kate Carleton, Paul Barnes, Aaron Pierce, Renzo Ventrella, Christian Leaf, Martin Dunn, Neil Kapit, Jim Dewey, Jenai Pellerin, and more coming on board each week, Siike is a fifth of the way to his goal in just two short months. Once all 55 pages are completed and compiled as a 'jam' style comic, it will be packaged with a few pages about brain aneurysms, information on the people sponsoring the comic book, America's Brain Aneurysm Foundation (www.bafound.org), and a short story featuring unused artwork and photos to show how this project all came together.

Siike hopes to have the 100 page graphic novel print ready by Christmas 2012. It will sell for $10, in limited supply at first, with all proceeds going to the Brain Aneurysm Foundation.

There are six million people in the United States at this very moment with an unruptured brain aneurysm. At any second, it could burst, with a great chance at ending their life. For those that survive a brain aneurysm, it's guaranteed they will experience another in their lifetime. It's averaged out that every 18 minutes, someone suffers from one of these ruptures. Siike hopes his comic book will change those statistics.

"It's important that people just know about this. Raising money with this comic will help those already affected but the knowledge inside the pages alone could save a life that has yet to be affected. I think that?s kind of cool, a superhero that will actually save a life. I hope we can see more of that in the future."

At The Naïve Project, a quote adorns any spot that Siike can find room for it, from his favorite superhero playing actor of all time, Mr. Christopher Reeve. The quote reads, "At first dreams seem impossible, then improbable, and eventually inevitable." Saying that Siike is a dreamer is an understatement. And though some may not see the irony in the name he gave his company, Siike shows no fear for the many obstacles that still lie ahead.

"My concept may seem stupid to some, a waste of time to others, but trying to do something good is never any of those things," he enthuses. "During my attempts at getting this project off the ground I've run across people that have tried to stop it, bring it down, and take personal shots at me. I let them, because I know they are wrong. The life I save could be their mother, father, significant other, or child. I can endure a few haters knowing the end result will be someone not going through what I went through, or what someone who had it worse than me went through.

"Hopefully there are 43 more artists out there that appreciate and respect what I?m trying to do. Hopefully they'll join us."

• If you’d like to hear more about Siike's story and this project, get a free download of the Battle Drawn Radio Show’s Episode 6, where he and I talk about The Naïve Project, Solestar, and our mission at Nerd Nation.

• Contact Siike @ExplodingBullet or by email: thenaiveprojectATgmail.com or via www.facebook.com/thenaiveproject. Listen to his podcast, which he co-hosts with his good friend Gene Hoyle, at www.nerdnation.co.