US comics news site Newsarama reports on an interesting development in Google’s ongoing mission to digitize some 10 million books stored in US university libraries.

One of the treasure troves being considered for the digital world is Michigan State’s Russel B. Nye Popular Culture Collection, which has a 200,000 piece comic art collection with an emphasis “on graphic storytelling in the newspaper comics or newsstand comic book tradition to present a complete picture of what American comics’ readership has seen, especially since the middle of the 20th century.”

According to Newsarama, materials in the public domain will be available through Google, including The Yellow Kid strips from the late 1890s and Famous Funnies No. 1, published in the 1930s and considered by popular culture historians as the first true American comic book. Material still under copyright won’t be freely available.

All very interesting, especially given the amount of digital comics now online.
Posted by John Freeman at 10:35 pm No comments:

El Tigre heads for the UK

Trade magazine Broadcast reports Nickelodeon has picked up hit animation series El Tigre: The Adventures of Manny Rivera. A Flash-animated comedy-adventure series created by husband and wife team Sandra Equihua and Jorge Gutierrez, havefollows Manny, the youngest member of the Rivera family, who comes from a long-line of men with superpowers. His dad is a former superhero, once known as White Pantera, while his grandfather is a supervillain.

20 thirty minute episodes, created by a highly talented animation team, have been made so far and the show was a success out from the get go in the US, with positive acclaim from industry watchers such as Cold Hard Flash.

The show will air on Nicktoons in the UK at the end of this year. Nickelodeon has also acquired the second series of teen drama Unfabulous¸ which stars Julia Robert's niece Emma.
Posted by John Freeman at 9:31 am No comments:

Email ThisBlogThis!Share to TwitterShare to FacebookShare to Pinterest
Labels: Animation 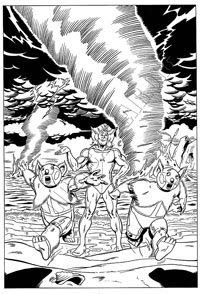 Warner-based Paula Weinstein will produce through her Spring Creek Productions. banner, along with Dick Robertson and Lew Korman.

Come on, you must remember the Thundercats? They were a group of humanoid cats (with feline names like Lion-O, Tygra, Panthro and Cheetara) who flee their planet of Thundera after it's destroyed. Once crash-landing on another planet, Third Earth, they must thwart Mumm-Ra, an evil sorcerer, bent on killing them off.

I certainly do -- one of the first internal freelance commissions I had at Marvel UK was writing Thundercats stories (The Marvel UK comic ran for 129 issues and was published for three years) and, on one commission, getting a salutory lesson in how to cut a story "that could not be cut!" from Richard Starkings, who skillfully trimmed an 11-page story to just 5. That certainly showed me and was, looking back, a valuable lesson.

The story involved the secretive Berbils, who always seemed a bit wet (like knock off Ewoks but worse), so I came up with the idea of them actually having a super secret ancient technological society no-one outside their species should know about, especially Mumm-Ra. Since they were partly robot/cyborg they had to have some kind of technology but I don't think it was ever explained in the TV show.

The edits were a salutory lesson on the commercial necessities of comics publishing when budgets on a title with declining title were trimmed as sales began to drop.

Variety says Sopocy has written the script as an origin story expanding on the major heroes and villains from the animated series, with the plot focusing on Lion-O coming of age as the leader of the Thundercats.

This web site a pretty good Thundercats resource (www.cheezey.org/thundercats) for the original US Thundercats comics published by Star, but there's nothing about the Marvel UK comics so I can't tell you exactly how many stories I wrote (although I do recall one fan actually asked me to sign every issue I'd worked on once, which was a bit of s shock when he lifted them out of a large duffel bag along with Real Ghostbusters comics...). The Thundercats Lair site (www.thundercatslair.org) also has a comics section but the MUK section is "coming soon", although it does have a bit of info in its gallery area, which features some art from the title. 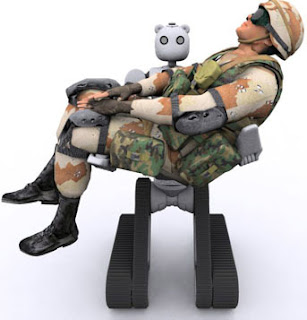 Tim Perkins was a a regular artist on the title and the majority of the pieces on the site are from Tim's collection, plus cover artwork for the UK's ThunderCats Issue #1, generously donated by the artist who drew it, Lee "Best Daleks Artist EVER" Sullivan.

• Update: Talking of robot bears, New Scientist reported 6 June 2007 on a 1.8-metre-tall Battlefield Extraction-Assist Robot (Bear) will be able to travel over bumpy terrain and squeeze through doorways while carrying an injured soldier in its arms. The prototype Bear torso can lift more than 135 kilograms with one arm, and its developer, Vecna Technologies of College Park, Maryland, is now focusing on improving its two-legged lower body. Not quite a Berbil, but surely one step nearer...
Posted by John Freeman at 7:59 am No comments:

I'm a Marvel, I'm a DC: After Hours with Superheroes

Very funny. Reminds me of those brilliant Toyfare magazine strips -- do they still do those?

Posted by John Freeman at 3:57 pm No comments:

(Thanks to FG for this item): Several sites, including MediaBlvd Magazine have posted transcripts of the telephone press conference held on Friday, 1st June with Battlestar Galactica producers Ron Moore and David Eick.

E! Online's Kristen also reported on the event and indicates she will be attending a BSG event on 6th June and will be reporting on it.

As fans of the show know, it's just been announced the series will end after four seasons and Eick says it was a decision that took some time to arrive at.

"Like all decisions this large, there were a number of questions that we had about it, internally, and a creative agenda that we wanted to serve," he explained. "We all had to collectively decide when it was time to be definitive about it, and that time is now."

Despite the decision, the show's strong ratings and critical acclaim may yet prompt further explorations of the new BSG universe beyond series end.

"The plan is to end the show and bring it to a definitive conclusion," Moore revealed. "There are no plans, or even thoughts, in our heads of then doing a feature or mini-series, or anything beyond that, but you never say never because who knows how we’ll feel when we actually write the conclusion.

"Will there be a plotline or a story that springs to mind, or that we create on the page that then opens a later door? It would be foolish to say, 'Absolutely not.' But, right now, the plan is for a definitive end."

Eick also paid tribute to the cast of the show. "We’ve inadvertently stumbled upon the greatest collection of actors that I’ve ever been a part of," he commented, hoping to work with many of them again beyond series end.
Posted by John Freeman at 10:16 am No comments: