(via Comics2Film): Film web site MovieHole has laid hands on casting calls for the film adaptation of Alan Moore and Dave Gibbons' seminal Watchmen, with character outlines as follows offered as a guide to agents seeking to work for the actors they represent:

Sally: Laurie's mother, Sally is a former superhero: a beautiful, fit woman in her 30s (actress will play age 25 - 65). One of the original 'Watchmen', she's a woman with secrets. A woman who starts drinking in the early afternoon and whose condo is full of souvenirs from her crime-fighting days. Sally was almost raped by Edward Blake (The Comedian), an event that almost broke up the original group. But she (literally) kissed and made up with Blake years later, and has kept secret the fact that he is Laurie's biological father. Requires some nudity and intense physicality.

Moloch / Edgar Jacobi: Mid-Late 60s. This withered older man is a former supervillain, now dying of cancer, seen placing flowers on the grave of The Comedian. Recognized by Rorschach as The Comedian's former arch-enemy, he's aggressively questioned and intimidated by Rorschach in his home, and reveals that a blubbering, drunken Comedian broke into his home right before his death;

MovieHole also published for the characters "Big Figure" and "Body Builder".
Posted by John Freeman at 9:37 am No comments: 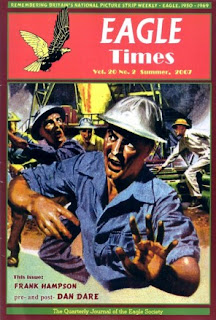 43 Years in the Third Form 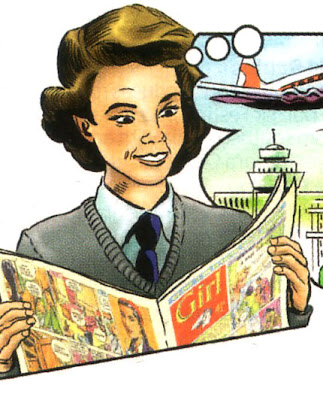 (with thanks to Graeme Neil Reid) via dtbNing): Girls comics? Eh what's that?

Starting on Monday 23rd July on Radio 4 is a five part dramatization about girls' comics, the episodes following directly on from Woman's Hour. Here's the Radio Times blurb...

If the names Bunty, Jackie and Misty stir a youthful nostalgia then the chances are you are female. These five short dramas celebrate girls' comics from the 50s through to the 80s using escapism from the harsher realities of teenage life as a common theme, while illustrating how "motivational stories for young ladies" ended up in later years as advice columns on how to snog without dribbling.

Well worth checking out, methinks. If you buy the Radio Times then you can see a nice little illustration on page 129 (part of this above) that accompanies the text, drawn by, well, Graeme!
Posted by John Freeman at 12:39 pm No comments:

New discussion board for downthetubes

In addition to a forum, this service allows me to include several blog RSS feeds on its home page, which means you can view streams from downthetubes posted news, Lew Stringer's and Steve Holland's blogs in once place, the latter both also terrific resources for British comics.

It's a terrific use of Web 2.0 technology and I invite everyone who reads this blog or uses the main downthetubes site to become a member.
Posted by John Freeman at 12:18 pm No comments:

Email ThisBlogThis!Share to TwitterShare to FacebookShare to Pinterest
Labels: Announcements

Bond Back at Pinewood

James Bond will not be returning to the Czech Republic. Variety reports that because of the lack of financial incentives in the country, 007 production company Eon has informed Prague's Barrandov it will not be using the studios for "Bond 22," according to Barrandov head Vladimir Kuba.

The Bond team are following the Hellboy franchise out of the Republic and Bond producers Eon have confirmed today that they are basing the Marc Forster helmed pic, which starts to shoot in December, at Pinewood.

MI6.co.uk reports the newly rebuilt 007 Stage will once again be central to the schedule, and Bond 22 is expected to take up much of Pinewood's lot. Pre-production and set construction is expected to begin late this year. Filming is due to start in January 2008 with Daniel Craig resuming his duties as 007 for a theatrical release on 7th November 2008. No details on foreign shooting locations are available yet, as no official announcements have been made.
Posted by John Freeman at 5:12 pm No comments:

The Return of Captain Babylon! 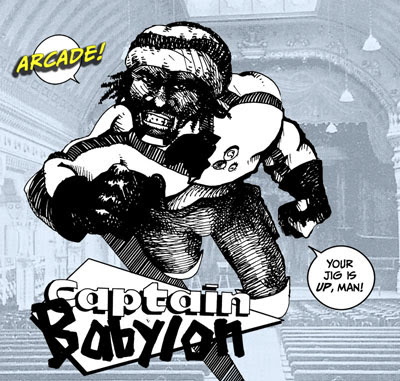 Many, many years ago, when I was starting out in British comics, designer Matthew Badham and I came up with a spoof version of Captain Britain called Captain Babylon. Nothing very interesting in that, you might think, except this particular spoof had a helping hand from none other than Marvel UK's top letterer at the time (and now Chief Tiger at Active Images) Richard Starkings, who very kindly lettered his adventures in the fanzine I published called SCAN* (whose miniscule subscriber base included Alan Moore and other comics luminaries).

The character has taken on a life of its own down the years, with many Captain Britain fans mistakenly citing Babylon as part of official Marvel continuity, partly, I suspect, because several MUK personnel and creators pitched in with contributions to SCAN over several issues, including writer John Tomlinson and artists Kev Hopgood and Mike Collins.

Suffice to say, I haven't thought much about the character for many years, until US writer and continuity guru Michael Norwitz - also a contributor to the official Marvel Universe project and whose online credits include annotations for Marvelman/Miracleman - got in touch recently asking if he could use Babylon and some of the other SCAN 'Captains' (such as Captain Politically Aware and Captain Ethnic Stereoptype) in a "Merlin's Corps" fan story, a fan tribute to the Captain Britains of many parallel Earths.

Well, we threw some ideas around the ether and now the story has been published, for better or worse, as one of several Merlin's Corps adventures now online, and bless Michael's heart, he's even given me a co-credit.

So, if you fancy finding out what happens when Captain Babylon goes up against Arcade in an all-new text adventure, click here to read "The World of /Dev/Null-A" ...

* The comics 'zine SCAN I edited is in no way connected with the student newspaper of the same name at Lancaster University (which I also edited for a year), but the editors there never realised what we were up to!
Posted by John Freeman at 4:07 pm No comments:

Graphic Novels by Any Other Name? 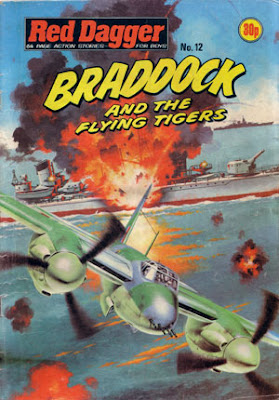 Jeremy Briggs has kindly provided downthetubes with a smashing feature and checklist for DC Thomson's Red Dagger title, a 64 page compilation title little known among comics fans which featured strips from Hornet, Hotspur, Warlord and others with many issues featuring terrific covers by Ian Kennedy.

• Main Feature: Graphic Novels by Any Other Name

• Red Dagger Checklist
The listing for Red Dagger has been built up from many different sources, including discussion on the EFA group. Not all sources could be cross referenced for accuracy. If you can add any additional information, or can correct any mistakes, then get in touch via e-mail and the listing can be updated.

Hope you like it and my thanks to Jeremy for writing it.
Posted by John Freeman at 1:00 pm No comments:

Walt Disney Pictures is joining the throng of film producers at this year's San Diego Comic Con at the end of this month to offer exclusive footage and panel discussions with the filmmakers of The Chronicles of Narnia: Prince Caspian and Disney-Pixar's Wall*E at Comic-Con.

Storyboards on Prince Caspian have been drawn by Mike Vosburg, artist on comic books such as Tales from the Crypt, and the film's official blog has several samples of his work for the project.