Former Radio 1 DJ Recalls Time with Roy of the Rovers 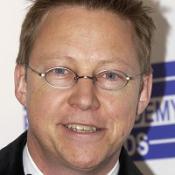 On the day Chris Moyles has announced he is finally leaving Radio 1, another BBC DJ has recalled his time as a comic characters in Roy of the Rovers in 1990.

Den of Geek have interviewed Simon Mayo about his new book Itch and they also asked him what it was like being  honorary vice-president of Roy's team, Melchester Rovers.

Simon recalled: "They just wrote and said could we include you as vice-president of Melchester Rovers, and you will be included in the cartoon strips, and we'll send you some of the original artwork. I said yes, and they published it. It bears no resemblance to me. I've got a square jaw and look quite masculine! But it's up on the wall, I've still got it, it's quite funny!"

The Roy of the Rovers comic, a spin-off from Tiger, was last published in 1993. Other celebrities to appear with Roy included Geoff Boycott, Emlyn Hughes and Bob Wilson.
Posted by Ian Wheeler at 12:34 pm

Email ThisBlogThis!Share to TwitterShare to FacebookShare to Pinterest
Labels: Roy of the Rovers