I've just heard that one of Britain's best loved and one of the world's most respected historical illustrators, Angus McBride, died on 15 May 2007 from a heart attack. He was 76.

Angus McBride was one of the world's most respected historical illustrators, who contributed to more than 90 titles for publishing company Osprey over three decades, Look and Learn, Middle Earth illustrations for Iron Crown Enterprises games (sample, left) and much, much more. (Warriors and Warlords: The Art of Angus McBride, published in 2002, is packed with fine examples of his stunning illustrations).

Born in 1931 of Scottish Highland parents but orphaned as a child, he was educated at Canterbury Cathedral Choir School. He worked in advertising agencies from 1947, and after national service, and emigrated to South Africa where he lived for several years before relocating to Ireland.

Osprey are currently preparing a fitting tribute to Angus and his work have set up an e-mail for people wishing to send tributes: tribute@ospreypublishing.com. They say they will do their best to publish a selection of them.

There's a small tribute to McBride on the Look and Learn blog, and of course, as Steve Holland reports over on his Bear Alley blog, some 500 images by McBride that the Look and Learn team have on their website... and there are many more to follow.

Update, 27 May 2007: The Guardian published a full obituary to Angus on 26 May, written by Steve Holland.
Posted by John Freeman at 10:53 pm No comments: 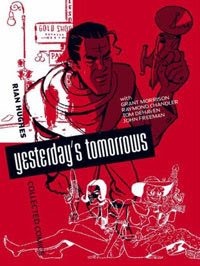 Variety reports that Lionsgate has acquired US and UK distribution rights to a live adaptation of the classic Will Eisner comic The Spirit. Frank Miller wrote the script and will direct.

The deal marks the start of a multipicture pact under which Lionsgate and Odd Lot Entertainment will co-finance and co-produce together. Odd Lot partners Gigi Pritzker and Deborah Del Prete are showing a finished script by Miller and will broker overseas territories during the Cannes Festival, which has just started this week.

I have to confess I'm more of a fan of Eisner's later work such as A Contract with God than The Spirit, but it's a series that's grown on me down the years, and meeting Will at Raptus in Norway in 2003 was one of the highlights of my time in comics.

The Spirit originally ran from Sunday 2 June, 1940 until Sunday 5 October, 1952, as a weekly feature, created by Eisner.

Miller says "Will was a dear friend, a mentor, and translating his vision to the screen will be a labour of love." Lionsgate Theatrical Films president Tom Ortenberg feels Frank Miller's "vision is perfectly matched to that of Eisner.

Let's hope so: while I'm personally enjoying Darwyn Cooke's updating of the character, I'm aware the book has come in for a lot of flak in some quarters.

Posted by John Freeman at 11:46 pm No comments:

Sourced via Joe Gordon's Forbidden Planet International's fab blog, who found them in turn over on the US comics news site Newsarama...

Favourite Comics Writer
Warren Ellis
Darn, I wish I kept all those fanzine he used to churn out in the 1980s…

Favourite Comics Artist: Inks
Paul Neary
Well, that's a result. Paul was editorial director for the latter part of my time at Marvel UK and odd though he may have been, he taught me a hell of a lot about comic creation. Nice one. Favourite Artist: Fully-Painted Artwork
Alex Ross
Well, no surprise there!

So you can kill off top characters and still be popular. Quick, let's make a list.

Favourite Manga
Blade of the Immortal

Posted by John Freeman at 3:05 pm No comments:

Bristol provided its usual mix of weird weather (wet) and entertainment (Star Wars storm troopers, Batman a gorgeous Black Cat and a determined Batman who wandered from the main hall to the hotel despite torrential rain in costume).

I don't know exact numbers yet but Saturday was incredibly busy, making it all the more difficult to catch up with a huge number of creators and publishers. Indie press reported some brisk trade and Bryan Talbot sold all 60 of his copies of Alice in Sunderland at the event - complementing the sellout success of his fantastic new graphic novel. The Blink Twice and Brodie's Law teams seemed on fine form, and there was much fun on the Panini stand thanks to its Dalek (not, as far as we know, a regular member of the Doctor Who Magazine staff).

After hours gatherings were equally crazed and as usual the hotel bar was packed and pretty raucous thanks to Eurovision parties taking place. The Eagle Awards went more smoothly and there was good news for Moonface Press who won an award for Hero Killers - congrats to them.

There's a feeling that the event might be beginning to outgrow the railway shed it takes place in, but it seemed all right to me. Great to see, as usual, such a great mix of both pro publishers (Titan, Panini, Cinebooks, Markosia etc), indies and the manga contingent.

Special thanks to Mike Allwood and the team for a great weekend!
Posted by John Freeman at 1:12 pm No comments: