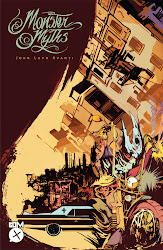 Publishers Com.X will be promoting a number of their innovative and eye catching projects at San Diego, including the recently-released Monster Myths written by John Lupo Avanti and Chester Westward, drawn by Avanti.

Alfredo, a recovering felon turned working stiff, resides in Lower Scabo where working-class people live under the tyranny of the evil Cannibals Motorcycle Gang. After being beaten and left for dead by the gang, Alfredo decides to recruit a group of graffiti writers to instigate a war between the riff-raff of Lower Scabo and their neighbours in the well-to-do community of Northview.

In doing so, Alfredo transforms from a two-bit perp into an iconic rebel, determined to free Lower Scabo from the control of those seeking power. An over-the-top, dark comedy pitching biker gangs against cleancut, real estate developers and, in the middle, an unlikely hero stirring the pot in the hope of saving his neighbourhood.


"I wanted to tell a story about all the weird stuff I experienced as a kid in the 80’s in my hometown, which was nicknamed Lower Scabo," Avanti told Comicosity earlier this year. "I wanted to do a book about beating off Doberman Pinschers with radiators, bikers that hang fat kids from trees and all the ways you can harass an ice cream man.

"From there, the book took on a life of its own. Most of the characters are based on someone or something from when I was a kid. It is dangerously sentimental, but that is who I am and that is what people like about my work."

- The 120-page book is on sale now. Check out the Com.X web site for more info, and there's an interview with Avanti on Broken Frontier in which he offers more background on his career and the book, too.