(Old post reinstated, ignore if RSS checking) Well, not exactly: World's End Television , the company behind London-based World's End Television are to shoot a short film in Hornby next week. The cast list for the film, Last Night, is under wraps: apparently revealing who's in it might warrant "unwanted attention", so I can't tell you any more than that.

There's been quite a bit of filming around here recently: Billie Biper has been filming at Sunderland Point, as part of the work going on the BBC's adaptation of Philip Pullman's The Ruby In The Smoke. Julie Walters was also here, playing the role of the charismatic and deadly Mrs Holland, a woman determined to mastermind Sally's demise.
Posted by John Freeman at 3:06 pm No comments:

Hmm. I find the wording of this press release from my local council highly suspicious...

The England flag will be flying from the roof of Lancaster and Morecambe Town Halls on Thursday in support of our boys playing in the World Cup in Germany.

The flag of St George will be flown when England matches are played and will continue to be flown on England match days if they make it through to the knockout stages of the tournament.
Football mad council staff will also be wearing their footbaking donations to Sport Relief

I wasn't actually aware that when it came to "our boys", there were any Lancaster or Morecambe-born players in the England squad, otherwise the Lancaster Guardian would be running them as pin ups by now...

As usual, the Council seems to have woken up the fact that a major event is taking place well after it's started...
Posted by John Freeman at 2:56 pm No comments:

A US cable network is hoping to wow cat fans with a new feline BIG BROTHER show. Animal Planet bosses will air MEOW MIX HOUSE for 10 weeks this summer (06).

* The hour-long weekly show will feature 10 cats sharing the same apartment and competing for Best Purr and Top Post-climber.

* A panel of judges will vote a cat out of the house every week.

I didn't actually believe this at first, but there's actually a web site about the show at: www.meowmixhouse.com

Posted by John Freeman at 10:01 am No comments:

Official: Cats are harder than bears 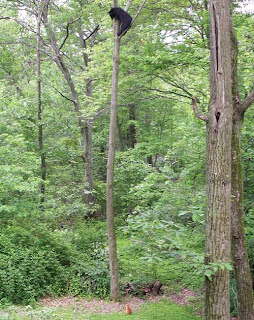 (Old post reinstated, ignore if RSS checking) Caught this pic in one of the tabloids while on a bacon bun run, of Jack, a 15-pound orange-and-white cat, who's sitting under a treed black bear in a backyard in West Milford, New Jersey, Sunday, June 4, 2006.

When the bear climbed down, the cat chased it up another nearby tree. Neighbour Suzanne Giovanetti thought Jack was simply looking up at the bear, but soon realized the much larger animal was afraid of the hissing cat. The cat's owners called it away and the bear ran off.

Photo: Suzanne Giovanetti, no infringement intended).
Posted by John Freeman at 10:20 am No comments:

It should have been easy to avoid the World Cup yesterday; but I actually found myself filling in the scores on the free Broadcast-provided wallchart. It was just like being an 11-year-old kid all over again.

Still, managed to avoid most of today's footie weirdness because a) we had to rescue a frog from our cat (where is she getting them from?) b) Star Trek copy writing needed doing c) a cartoon needed lettering - a new Greatcoat for Comics International d) housework and e) i finally managed to catch the finale of Smallville after Sky Plus mangled the recording earlier in the week. How are you going to get out of this one, Clark Kent?
Posted by John Freeman at 7:40 am No comments:

I felt really sorry for the teenager on the checkout at Sainsbury’s by the time we’d trekked its near deserted isles yesterday afternoon. He was missing the first England game. He’d missed the first goal. And when my wife asked him if there’d been another goal, the very thought that he might have missed that too – well, you can imagine the black look on his face.

Actually I was surprised Lancaster was as it busy as it was yesterday. There were still people shopping, including blokes, some of them with their partners with a look that said either “I prefer cricket” or “I either came out and helped with the shopping or it was the divorce courts”. Since, as I am trying to avoid the World Cup (this of course a pretty difficult task), it was interesting to get the chance to study both expressions (there would be plenty of opportunity to study the sheer joy on the faces of football fans on the national and regional news later, seemingly ad infinitum, the regional news reporting England’s victory, by dint of the reason that north west football team members are in the squad. This is is apparently bigger news than the tragedy of another 15-year-old being killed on our streets).

World Cup fever was at fever pitch yesterday: our cab driver told us that of the 90 taxis in the company, some 75 were parked up at kick off. It’s a small reflection of the world phenomenon football has become. TIME Magazine has a pretty exhaustive feature on the subject this week, and it makes for fascinating reading.

So why don’t I just embrace it? What’s the problem? I’m a bloke. It’s football. That’s the only demographic a marketing company needs to sell me everything. From wide screen TVs, lager, deodrant and... and, well, the World Cup.

And I guess that when it comes down to it, that’s what irks me. That this whole thing has been taken over, hyped to death, in the same way that Christmas begins in September. Yes, it’s a minority view, but surely no true footie fan needed to be told the World Cup was happening? It happens every four years (although it does seem that all these football events are merging into one, to the extent that we couldn’t even remember who won last time round this morning. Was it Greece (no, they won the European cup in 2004. Do keep up!) or Germany? (no, 1990) Or France? (1998). (Later: it was Brazil, for the fifth time) I think the truth of all this is, I’m useless at statistics (a sports necessity, surely), I’m useless at football (played once for the class team at school, never asked again), and I’m simply suspicious when all these politicians start wrapping themselves up in any flag (there was an ace cartoon By Morten Morland in the Times about this yesterday which pretty much summed up my feelings.

I want fans to enjoy the world cup; just don’t be surprised when I don’t join in (other than checking the score, wondering just how certain teams actually qualified over Turkey, Greece and others...)
Posted by John Freeman at 3:00 pm No comments: