The Moment Has Been Prepared For... 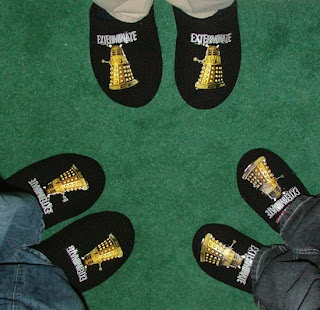 It's tonight. Pull on your Dalek slippers. Get the Doctor Who chocolate from the fridge. Take the phone off the hook because, believe it or not, there may be some people not watching it. And enjoy.

65 minutes of new "New Who" and we will know what the current season has been building up to. Russell T Davies episodes tend to be the Chinese takeaway of Doctor Who stories, brilliant at the time but leaving you with a hollow feeling a few hours later, however last week's The Stolen Earth had just everything that you would have wanted which, in comparison to the reflective Turn Left, raced breathlessly to a potential regeneration.
Will the Doctor regenerate? Will he get a hand from Captain Jack? Eight hours and counting...
Posted by Jeremy Briggs at 10:06 am 2 comments: 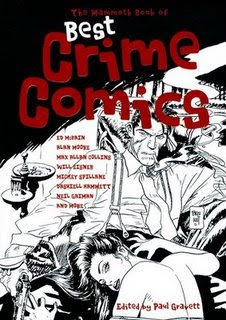 Posted by Matt Badham at 7:47 pm No comments: 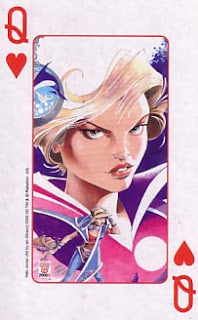 The August issue of SFX, number 172, comes with a nice little freebie of a set of 2000AD playing cards. Nicolai Dante is, appropriately, the Jack of Hearts while Halo Jones is the Queen of Hearts, although that perhaps should have more appropriately been vampiric mutant Durham Red who only manages the Three of Hearts.

Our congratulations must go to Paul Von Scott as the fourth issue of his excellent SF zine Omnivistascope is Fanzine Of The Month, making OVS four for four with that award. Our review of OVS 4 is here and you can buy the title directly from Paul at the OVS website.
SFX, which modesty describes itself as "The world's number one sci-fi and fantasy magazine!" (despite, according to their ABC sales figures, being outsold by Doctor Who Adventures by almost five to one) is available in all the usual newsagents for £3.99.
Posted by Jeremy Briggs at 7:29 pm No comments: 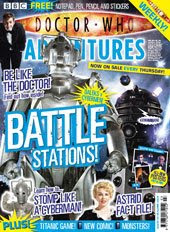 I haven’t updated the downthetubes page offering some information on UK comic sales in a while, but while doing some research this morning I made a quick check of the ABC data for various titles and was pleasantly surprised to discover the Beano and the Dandy now feature -- but sales of The Dandy are a shock.

Simpsons Comics, Doctor Who Adventures and In the Night Garden are among the best-selling titles.

The Audit Bureau of Circulations website provides free access to the circulation, distribution and attendance data for ABC certified Magazines, Newspapers, Exhibitions and Directories within the UK and Republic of Ireland.

Not every magazine is ABC rated, so several titles do not feature in the quick list below.

The data covers the period 1 January 2007 to 31 December 2007. The figure listed is I believe the average sale per issue.

Taken as a whole unit the "DC Thomson Children's Entertainment Package (Boys)", which might include Commando, would appear to sell an average 154,400 copies per month

While some comic sales are down, there's still plenty of life in the sector yet. Intriguingly, girls comics/magazines are still a popular buy if you get the mix right (girls comics always used to outsell boys, I'm told) and of course the pre-school sector continues to boom by most standards.

It's a shame not every title reveals its sales figures but this snapshot of the industry would seem to indicate continued health, for now.
Posted by John Freeman at 7:19 am No comments: 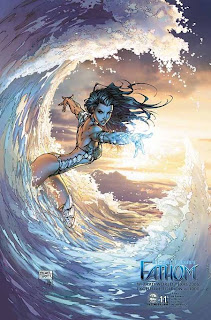 • Tim Perkins and other comics creators and web sites includng The Beat report the sad news that US artist Michael Turner (Witchblade, Fathom and many superb covers for Marvel) has died aged just 37 after a long battle with cancer. Our sympathies to his family and friends. Tim's post inlcudes some of Michael's outstanding art. Anyone wishing to make a charitable donation to please send to Michael Turner's requested charities: The American Cancer Society or The Make-A-Wish Foundation.

• To celebrate the release of the over-sized hardcover Dan Dare collection, MySpaceTV is airing an exclusive trailer of Virigin Comics take on the doughty pilot of the future. To view the bold, new trailer journey here. The over-sized hardcover edition collects issues 1 through 3 of Dan Dare, written by Garth Ennis with art by Gary Erskine.
• Preorder the collection (out in October) from amazon.com or amazon.co.uk
• Comic artist Al Davison (Spiral Cage, Sprial Dreams and many more great works) is hosting a five week life drawing class which begins on Wednesday, 9 July. For more information contact Al via his Astral Gypsy website

• The July 2008 issue of scifi webmag SFcrowsnest.com is now online. There are lots of goodies to read, including interviews with SF/F writers Robert J. Sawyer, Jacqueline Carey, Steven Erikson, Paul Kearney, Conrad Williams and Nancy Kress, articles in memory of Stan Winston and Algis Budrys, a movie review of the The Incredible Hulk, while author Philip Palmer reports back from the Cannes Film Festival with a fan's eye on events.
US author L.E. Modesitt also asks what's likely to last in the genre, and there's more news and reviews of books, dvds, comics and magazines than you can shake a lightsabre at. Point your ordinance at www.SFcrowsnest.com

• Talking of SF, Steve Holland's Bear Alley is proving avtreasure trobve for fans of SF book cover art of late. One of his latest postings is devoted to John Harris, another illustrator being covered (albeit briefly) in Steve's upcoming Sci-Fi Art book so I won't say much here. A very good book of his work came out in 200, Mass, with text written by Ron Tiner, which offers a lot of insight into his thinking and techniques.

• The Beat has published several new photos from Batman: Dark Knight, which has been dedicated to Heath Legder, who completed his role as The Joke shortly before his untimely death.

• Talk about memorable reading. Over on blog London Loves Comics there's a plug for the 1981 2000AD annual, which features the Mekon's "10 ways to destroy the world". One of them, which operhaps stuck in the mind of Garth Ennis when it came to the new Virgin Dan Dare series, is to introduce a black hole to the solar system and watch it such all the energy from the Earth...

• Neil Gaiman offers a disturbing post, The New Paranoia, on the tricks authorities might get up to when you enter a country with your laptop. "I have friends who practice ultra-safe computing when crossing borders: examine their computers and you'll find yourself on something almost data-free, so you'd not be looking at encrypted files, you'd simply not be looking at files -- the same kinds of things that Cory Doctorow describes in Little Brother. And I've always thought they were being, well, silly." Then Neil read an article in the LA Times which reported that US Courts have ruled, as recently as this spring in a case stemming from a search at LAX, that there's no need for warrants or suspicions when a person is seeking to enter the country because any "routine search" is reasonable under the Fourth Amendmentm and started to worry... . In effect, it's like luggage: anything and everything in your laptop, cellphone, BlackBerry or digital camera can be examined and copied by US Customs and Border Protection agents. Read Neil's full post

• Finally for this TubeSurf, a quick reminder about the excellent Alan Moore interview published earlier this month on the Forbidden Planet International blog (part 1, part 2) and a plug for writer Pádraig Ó Méalóid’s Glycon live journal. It’s a fascinating repository of all things Alan Moore, including a lot of completely unavailable and extremely rare work, such as these incredible examples of Moore’s artwork for the From Hell series (thanks to Joe Gordon for the link).
Posted by John Freeman at 8:49 am No comments:

Manchester Zinefest returns in 2008 on the 30th August. The venue will be Urbis, slap bang in the city centre.

The Zinefest last ran in 2006, the work of a loosely organized group whic attracted some 200 people who viewed the exhibition, took part in discussions and workshops, plunder zine distros from all over the country and eat lots of vegan toasties. (Pictures on xsynthesisx zine's webpage).

The event's return is surely testament to a growing confidence in the ever-present but rarely decalred strength of the comics community in Britain's North West which includes at least two comic publishers -- Lucky Bag in Oldham and ROK Comics in Lancaster - and is home to numerous comic creators including Oliver East,Tim Perkins, John Ridgway, Adrian Salmon, Andy Diggle, Nick Miller and many more.

• If you'd like to help out, the organisers have an email list they use to keep in touch with each other: to subscribe, send a blank email to manchesterzines-subscribe(at)lists(dot)riseup(dot)net.

• Manchester Zinefet web site
Posted by John Freeman at 8:29 am No comments: 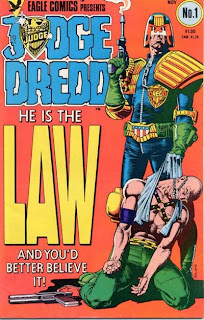 US publishers Dynamite Entertainment, whose titles include Red Sonja, Xena and Battlestar Galactica, and who recently announced a new Buck Rogers title, have just secured the rights to produce an all-new Judge Dredd comic for the American market, likely to launch in mid 2009.

Top US comics site Newsarama reports Dynamite Entertainment has landed the rights from Rebellion to produce an original Judge Dredd comic aimed at an American audience, with Garth Ennis and John Wagner as Dredd’s likely creators/overseers. Dynamite has also secured rights to other 2000AD characters but Dredd will eb the first title out of the gate.

The company, which made a success of titles such as Red Sonja and BSG, is clearly hoping it will do better than DC Comics previous Dredd title or the 1980's Eagle Comics reprints published. Nick Barrucci, President of Dynamite Entertainment told Newsarama that the deal with 2000AD and Judge Dredd owner Rebellion is something that he’s been hoping to work out since he started the company.

“I had stopped by Garth Ennis’ apartment one day to talk about some of his other work, and Rebellion came up,” Barrucci revealed. “I told him that I had wanted to publish Judge Dredd in the United States for a while and had not had any luck in reaching the right person at Rebellion. Garth told me that he was in touch with one of the editors over there, Matt Smith, on a somewhat regular basis, and offered to reach out to him. Garth made the introduction, smoothed the way for us a bit, and from there, we started working with Rebellion’s business affairs, and we started the ball rolling. We’ve been working on this for the last four months, at this point.”

The full creative team has yet to be decided but it's reported both Brian Bolland and Alex Ross will be cover artists.

Judge Dredd was first published in US comic format in 1983, one of several Eagle Comics reprint titles, and the magazine Comics Revue republished episodes of the Judge Dredd newspaper strip which was first published in the Daily Star. Don Markstein's Toonpedia notes DC Comics licensed the character in 1994, publishing original Dredd stories for two years as well as running a reprint series. Dredd has also appeared in several crossover comcis with US comic characters, including Batman, Lobo and the Dark Horse Comics' licensed version of 20th Century Fox's Predator in 1997.
Posted by John Freeman at 8:01 am No comments: