It's grim being a writer

Well, that explains a lot... apparently, clinical depression and the prospect of a shortened lifespan are some of the joys successful scriptwriters are more likely to face, according to TV psychologist Raj Persaud.

UK media magazine Broadcast reports that speaking at a session on writer's block at the Screenwriters Festival at Cheltenham Studios this week, Persaud revealed that between 30% and 80% of writers suffer from clinical depression.

"Writers have to be like that to emotionally engage with their material, says Persaud, "but they do they tend to make poor decisions in their life because they are emotional and rash – you only have to look at the example of Sylvia Plath and her disastrous relationship with Ted Hughes.

So all those piles of paper in my office are the result of being creative. I don't think that argument will cut much ice with Clutter Nutters.

As if the dnagers of being depressed aren't bad enough (and I recall someone saying that the actual use of too many words can drive you mad, too, so writers are always in danger of that...) Persaud also says that things actually get worse for the writer once they start receiving critical acclaim. One psychological study looked through a database of Academy Award winners to examine death rates and found that best actor Oscar winners lived four years longer than average, but winning screenwriters lived four years less than average.

"Scriptwriting seems to be the only profession where success and recognition seems to lead to a shorter life," said Persaud. "Maybe with success they expect their life to change dramatically from that point on and are disappointed when it intrinsically stays the same."

Ouch. You almost feel for Alan Moore and co., don't you... No wonder you can find so many writers in the bars at conventions...
Posted by John Freeman at 1:32 pm No comments: 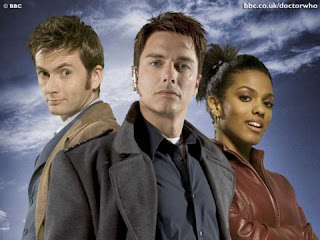 ...you are not. Do not attempt to imitate him.
With all this talk of "homage" in New Who perhaps one has been missed - the juvenile Face Of Boe himself. To misquote the voice over from the original Captain Scarlet series -
"The Master - sworn enemy of Earth. Leading the fight, one man Rose has made indestructible. His name - Captain Jack."
Posted by Jeremy Briggs at 5:22 pm No comments:

Who's bothered by homage? 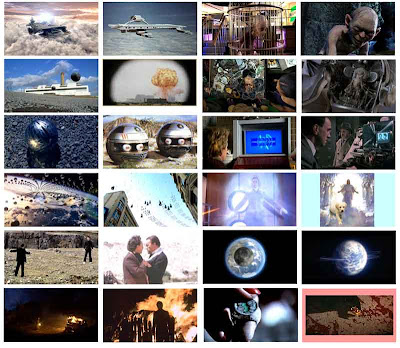 There's been plenty of debate about this elsewhere, much of it far more erudite than anything I could contribute. But now they've been drawn to my attention, I'd just like to say how much I've enjoyed spotting the television and film references in the Doctor Who series finale 'Last of the Time Lords'.

Quite apart from the glaringly obvious, like the most recent Flash Gordon movie homage (right down to the laugh) as a mysterious woman(?) collected the Master's ring from his funeral pyre, many fans, largely over on Outpost Gallifrey, have noted references to Battlestar Galactica, Dan Dare (there's a space battleship Valiant in "Operation Saturn"), Captain Scarlet (Cloudbase), Terrahawks (Zeroids), Men in Black, Lord of the Rings (the Doctor is Gollum!), Brazil, Star Trek (the universe restored to normal, as often happened in modern epsiodes from the franchise such as Star Trek: Voyager's Year of Hell two-parter - not my favourite Star Trek storytelling device, I must say), the first Superman movie, Star Wars... even, perhaps, the anime Dragonball Z.

Others have noted mythological/religious themes - the Doctor resurrected (or the Doctor as Tinkerbell, as some unkindly suggested).

Then of course there are the references to past Doctor Who itself - I couldn't help but think the power station in this episode bore at least a passing resemblance to the one in Claws of Axos (okay, perhaps that's a little tenuous), and the Master's statue echoes the giant face of the Doctor in The Face of Evil. Plus, there's echoes of the Seventh Doctor's battle with the Master in Survival; and mass alien invasions/attacks have become synonymous with series finales in the last three years - the Toclafane's 'swarm' akin to mass Dalek armies on the move in Doomsday and Bad Wolf/Parting of the Ways.

A lot of fans have criticised all this 'homage', but I have to wonder just how much is genuine and how much fans are reading too much into their viewing of the episode.

For me, this was a great finale to the season. While some episodes this season left me disappointed -- 'Blink' and 'Family of Blood' were my favourites overall -- I think Doctor Who ended on a roller coaster of a high note (lack of science fiction aside). I'm as usual looking forward to the Christmas special and season four.

And yes, that includes the return of Catherine Tate.

* Many of the screen grabs featured in the montage above sourced from the fab Adventures in Time and Space site. Cheers! (Jesus and his puppy from here)

* Broadcast reports the season finale of Doctor Who far outstripped any other show on Saturday evening with 7.1m (36.9%) tuning in at 7.05pm to see if he managed to save the world once again. The 50-minute show, starring David Tennant, grew its audience to 8.2m (39.4%) by the end of the nail-biting episode. The figures were especially impressive given that the series average has already set a high bar of 6.7m (36.7%). and its nearest rival, ITV1, was quite some way off the pace with 3m (16.1%) watching the movie The Mummy.
Posted by John Freeman at 12:35 am No comments:

Email ThisBlogThis!Share to TwitterShare to FacebookShare to Pinterest
Labels: Doctor Who, Reviews 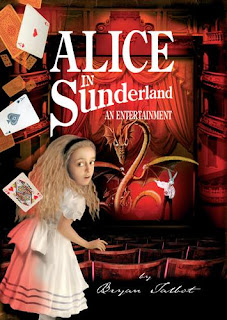 Ansible 240 reports that the Dark Horse version of Bryan Talbot's excellent Alice In Sunderland has been nominated in the Graphic Novels section of the American Quill Book Awards "the only televised literary prizes".
More details and a full listing of nominees here.
For those not familiar with it, Ansible is a monthly literary science fiction and fantasy newszine available by e-mail from the prolific David Langford. More for those who prefer their books not to be interupted by pictures, but still well worth the read!
Posted by Jeremy Briggs at 5:42 pm No comments:

Web site Broken Frontier has published the first part of a detailed interview by Dave Hine with London-based freelance journalist, curator, lecturer, writer and broadcaster and comics guru Paul Gravett, one of the creators of the ground-breaking indie comics magazine Escape in the 1980s who continues to promote the comics form with unrelenting enthusiasm in the UK and beyond. Read the Interview �
Posted by John Freeman at 9:11 pm No comments: