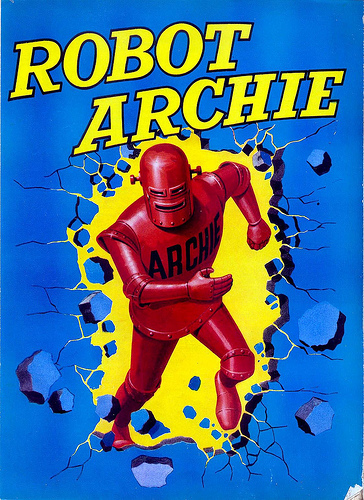 (with thanks to Leah Moore and John Reppion): Back in 2005 and 2006, British comic creators Leah Moore, John Reppion and artist Shane Oakley had the opportunity to resurrect a big gang of classic UK comics characters in their dad/father-in-law (some bloke called Alan something or other) plotted Wildstorm series, Albion.

"We loved scripting The Spider, Charlie Peace, Grimly Feendish… every single one of them to be honest," recall Leah and John. "It was a true honour (not to mention loads of fun) working with such important, influential characters and it’s almost impossible to pick just one favourite out the lot.

"We did, however, always have bit of a soft spot for the battling British robot himself -- Robot Archie -- and it seems we are not alone.

"www.RobotArchie.com (not yet live) aims to be the definitive fan-site for Archie enthusiasts the world over and we’re doing our bit to help make that dream a reality," they reveal on their web site. "So, Robot Archie fans, here’s how you can help. Artists: RA.com wants your Robot Archie pin-ups and more! Writers: RA.com wants your articles on Archie, his history, reviews, interviews, and anything else you can think of!

"Fans: RA.com wants your cover scans, collectors info, classic interviews and everything else!

"Anything Robot Archie related you can think of (within reason), RA.com wants!" the pair enthuse.

Leah and John are keen to stress that they are not running www.RobotArchie.com themselves but they will be doing everything they can to help out with getting the site up and running and getting as many people involved as possible. If you want to submit artwork, articles, or whatever to the site you can use www.moorereppion.com/contact and they’ll be only too happy to pass your info on to the RA.com webmaster.

"Robot Archie is a true British icon: a symbol of a lost age when Newsagents’ shelves groaned under the weight of a vast range of truly fantastic, original and spellbinding UK comics," notes John. "Let’s try to recapture some of that magic and work together to make www.RobotArchie.com a fitting tribute to Archie and all he stands for."

Posted by John Freeman at 9:29 am No comments: 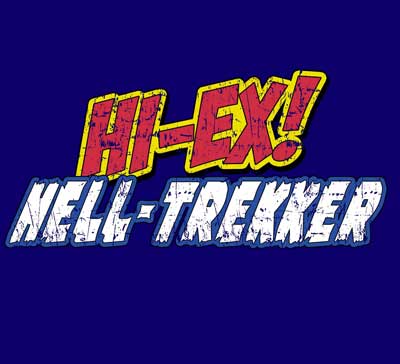 How far would you go to read comics? Maybe a trip to the local shops?

Well, comics fan John Burdis has gone a few steps further than that and organised a marathon bus journey from the South of England to the Hi-Ex Comic Convention, which takes place in Eden Court Inverness on the 27th - 28th March.

"I was in the 2000AD Online Chatroom and mentioned the Hi-Ex! and how I would like to go. The problem would be the cost and the time taken. A drive from Maidstone to Stansted, flight to Inverness and taxi to hotel and then the return journey.

"One of the regulars on the forum suggested we should organise a minibus to travel up there. Later that night I pondered on this and decided why not, if enough people want to do it."

He got enough people, and the minibus - nicknamed the HiEx Hell-Trek (after a strip in 2000AD comic) will be winding its way towards Inverness, picking up comic fans on the way. And John, being an ex-soldier, is well prepared for the journey.

"I’ve had chocolate bar ‘rations’ and polo shirts emblazoned with the Hell Trek logo made for each of us, and one of the polo shirts will be entered into the HiEx charity auction on the weekend of the convention.’

But isn’t this a bit far to go to meet some comic artists? 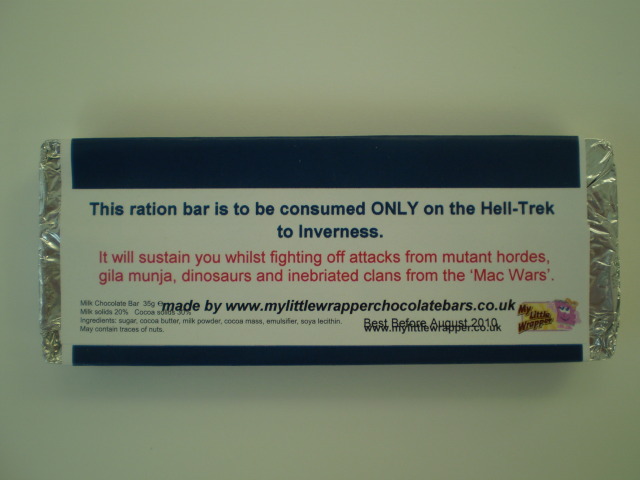 "This event has had nothing but praise from writers, artists and fans alike," John explains. "That's one of the reasons I wanted to go - plus, some of my favourite creators will be here."

Guests include French artist Michel Rodrigue, who created the official mascot for the inaugural rugby World Cup in 1987 and worked on the Tin Tin magazine. 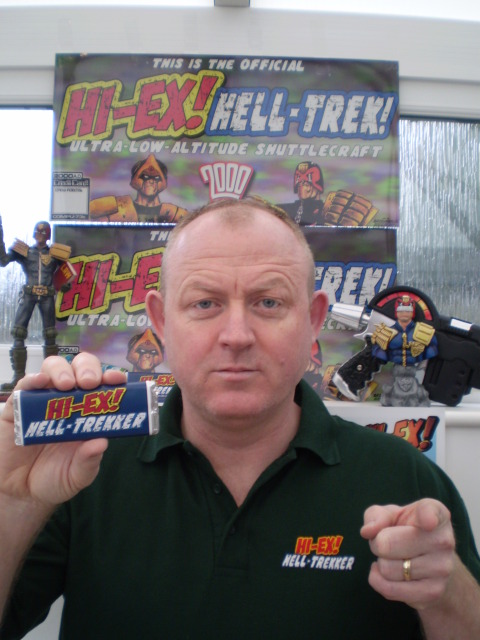 "This is where the differences are between comic and football fan are apparent," he adds. "They pay £40 plus to watch a match, see the stars from a distance and never meet them. They also buy all the tops and merchandise with no real thanks from the players. But when I go to an event like this it costs a lot less to get in, I meet and talk to all the artists and writers, I can even have art drawn for me for nothing, and at the end of the day can have a drink and more chat with the writers and artists. Now that is good value as far as I'm concerned."

HiEx is organised and run by artist Vicky Stonebridge and Futurequake editor and comic writer Richmond Clements. While the long term future of Hi-Ex is vulnerable (there is a strong demand for an event of this kind in Scotland and in the North), funding is a problem. For Hi-Ex 2010 the Highland Council have kindly stepped in with a grant to assist with outreach and other additional activities.


• Follow John Burdis and the Hell Trekkers on Twitter: http://twitter.com/JBurdis
Posted by John Freeman at 9:43 am No comments:

We don't normally circulate much non-British news, but this US-based music project posted their international appeal for artists on our events page, so we thought we'd repost the information here.

A New York-based xxperimental music ensemble, thingNY is looking for comic book artists, illustrators, designers and other imagicians to illustrate the comic book libretto (liner notes) of their soon to be released album, ADDDDDDDDD: an opera by thingNY.

Debuting in October 2006 at Jersey City's landmark Loew's Jersey Theatre, thingNY has gone on to produce three seasons of experimental music including a radio play by Beckett, a collaborative opera and over two dozen premieres.

Paul Pinto tells downthetubes he is hoping the show may be brought to the UK at some point.


• To read more about the project and to download guidelines and audio here: http://www.thingny.com/opera/call

• Selected artists will be contacted by 22nd March and final drafts will be due 1st April 2010. The company says it regrets it cannot pay volunteer artists but selected artists will receive a copy of the finished product, credit and two tickets to the thingNY show of their choice.
Posted by John Freeman at 10:51 am No comments:

(With thanks to Birmingham Mail's "Speech Balloons"): British publisher Classical Comics has just launched a series of interactive motion comics, starting with its award-winning Macbeth.

"It's been nearly a year in the making -- and still isn't quite finished!" say the company, who will be attending the UK Education Show to promote their entire comics range this week.

The Interactive Motion Comic features the wonderful artwork of Jon Haward (who has just been interviewed over on Imagine Daily) and offers all three text versions of our Macbeth graphic novel (Original, Plain and Quick Text) on disc - a format designed to give teachers and students "the very best environment" in which to experience the play. The format lets viewers choose to view one panel at a time or sit back and watch in movie mode and includes context notes for the Shakespearean language.

Not only do you see the characters from one of Shakespeare's best-loved tragedies move, but you also hear them speak in a full audio production that includes the vocal talents of the wonderful
Juliet Stevenson (Truly, Madly, Deeply, Bend It Like Beckham, The Snow Queen) and the eminent Sir Derek Jacobi (I, Claudius, Hamlet, Doctor Who).

"It's ideal for whole class teaching, for small groups, or for personalised learning.

"The concept of Classical Comics is truly inspirational, creating, as it does so magnificently, an accessible and fascinating mix of visual and audible drama," says Jacobi of the Classical Comics range. "The stage and the page brought vividly to life.

"The artwork of Jon Haward is both dramatically compelling and beautifully illustrative. His pictures illuminate the words to perfection and bring these great works leaping to mind and eye.

• Classical Comics online at: www.classicalcomics.com
Posted by John Freeman at 11:14 am No comments: