The Best of the Season to all our Readers! 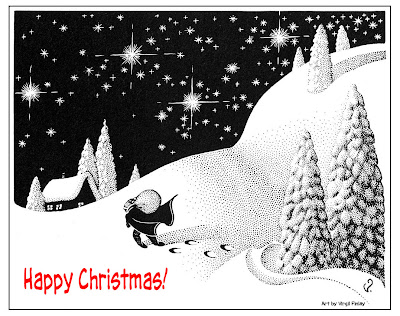 Unlike the talented comic artists whose work we promote here, I can't draw for toffee, so I hope you don't mind this adaptation of a piece of art by the great pulp magazine artist Virgil Finlay.

Have a Merry Christmas and a Happy New Year - although we'll probably be posting more stories between now and the start of 2012!

With the launch of The Phoenix in January, 2000AD's 35th Birthday in February and the continuing strength of the UK indie press, it's not all doom and gloom out there, no matter what the mainstream media would have us believe.

Our thanks to everyone who sent us stories - publishers, individual creators and others - and the very best of luck in your comic endeavours next year.

• More eCards sent to the DTT team here on my virtual fireplace on Flickr
Posted by John Freeman at 12:00 pm No comments:

Austerity Reviews of the Year

It is that time of the year when bloggers think of their favourite books, comics and magazines of the year. However since there can be a lot of overlap in what various people consider to be worth mentioning, and you don't really want to have to read several long reviews of the same title, we have decided to do something a little different.

Now that might sound easy but one word to sum up a favourite British book, comic or magazine of the last year or so is more of a challenge that you might think, especially as we have decided that no one can use the same word twice.

So in the spirit of the time of year the team here at downthetubes, John Freeman, Jeremy Briggs, Richard Sheaf and Ian Wheeler, wish you all a Merry Christmas and in the spirit of the recession we present you with, in alphabetical order, our Austerity Reviews Of The Year. 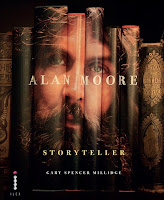 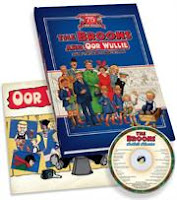 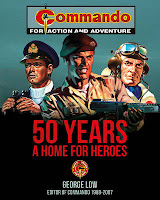 COMMANDO - 50 YEARS A HOME FOR HEROES 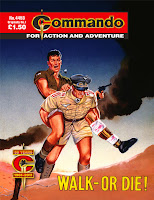 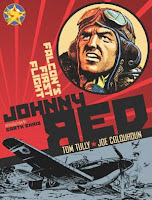 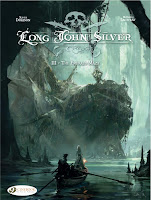 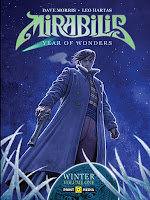 (As John and Jeremy both work on Strip we will now point out that "other A4 comic magazines are available" and that Ian and Richard were not threatened with being fed to Hook Jaw if they didn't choose their words carefully!) 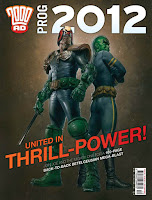 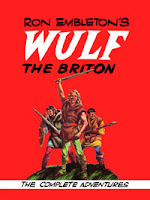 Jeremy: Weighty
Posted by Jeremy Briggs at 7:00 am No comments: 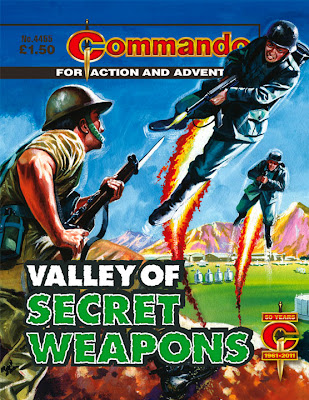 The last four Commandos of the year are now on sale, and the veteran title sees off its 50th aniversary year with another batch of great stories old and new – and what a year it's been for the title.

"It doesn’t seem long since I was sending out the details of the first batch of the year but it was 104 issues ago," notes editor Calum Laird. "The good news is we’ve slightly increased our sales over the year and our subscriptions have increased by a whopping 45 per cent.

"This is great news in the current climate."

The Valley of Destruction, the Germans called it. It lay deep in the heart of the Tyrolean mountains, and there Germany's most brilliant scientists worked night and day building Hitler's deadly V for Vengeance weapons.

They were all there in that valley, being made ready to unleash on Britain...

One look at the cover tells you all you need to know about this story," says Calum Laird of this archive tale. "It's a real flight of fancy. (And I don't just mean because there are Germans with jetpacks.)

"Or is it?  As more information on the Third Reich's secret weapons programmes comes to light, some of the gear drawn up by Ortiz doesn't seem so far-fetched.

"Perhaps author Eric Hebden, who had been a Major in the British Army, had some inside knowledge -- who knows?

"Whether he did or not, it's a great story and Ken Barr's Nazis With Jetpacks cover sums the whole thing up. Now, I must fly!" 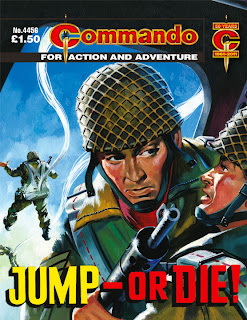 The dull throb of the Dakota's engines pounded remorselessly in the paratroopers' ears as they filed in to their jumping order.

Nobody spoke, nobody smiled, nobody spared a kindly glance for the next bloke in line. Lips were dry and taut, and eyes glowed with a mixture of determination and FEAR!

And even as the red light changed to green for GO, Captain Bob Brown knew that he was the most afraid of all.

Which was all wrong, because he was meant to be officer in charge of this mission, an example to all the others...

"British Paras were involved in no end of covert operations in the Second World War," notes Calum Lard. "This was a problem, because most of them took place under the concealing cloak of darkness.

"Why is this a problem? Well, a dark night is one of the most difficult things an illustrator can ever be called on to draw. By definition, there's very little light to see anything by.

"This doesn't seem to have put artist Cortes off, however. His drawings of the Paras in action at night make superb use of black ink without losing any detail and without looking anything apart from, well, night.

"Kellie's script is as full of action and conflict as you'd want, while Ken Barr's cover leaves you in no doubt about the menace in the title." 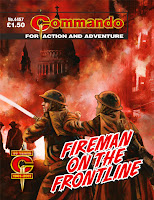 As a fireman during the London Blitz, Ted Roscoe was exempt from Armed Forces duty, as his was a reserved occupation deemed important to the war effort. He knew all about danger just the same, though, dodging bombs as he fought fire after fire. However, the Army needed Ted's expertise too and he soon called to the front line.

Here Ted found himself embroiled in a deadly game of survival, with not just the enemy's hand against him! 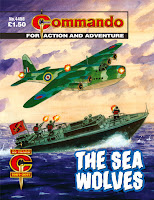 Like wolves, the torpedo boats and gunboats of the Allies and Axis hunted the seas of the Adriatic in packs. Like wolves they fell on their prey, always going in for the kill.

And, just as amongst packs of wolves, there had to be a top dog - would he be British or German?

Get The Phoenix for Christmas!


If you're looking for a last minute Christmas present for the youngr comic fans in your family, The Phoenix - the new weekly comic launching in January - would be an present for children, delivering 32 pages of fantastic story-strip entertainment.

We've now received a copy of their free Issue Zero - offered through Waitrose - and can echo the comments of others who have praised the mix of adventure stories, humour strips and text-based features. It's a lively combination and more focused than its predecessor, The DFC, with some great creators involved.

The Phoenix launches on 7th January 2012 - check the official web site at www.thephoenixcomic.co.uk for retail outlets that will be stocking it.

Myriad Editions has announced its shortlist for its "first fictions" competition which we reported on earlier this year.

The nominees include Hannah Eaton, Thom Ferrier and Tom Eglington, who is paying for his art career by writing comics stories, including the first Tharg’s 3riller which debuted in 2000AD Prog 1740 - "Silver -Tongued Exploits of Cosmo Nibs", drawn by John McCrea.

The shortlisted entries were chosen from a longlist of 21, described by Ian Rankin as "a very high standard overall". Entrants were asked to submit 15–30 pages of a graphic work-in-progress, either fiction or non-fiction, in black and white.

The winning author or team will have their work published by Myriad Editions in 2013.

In all, 74 qualifying submissions were received. The shortlisted entries will be showcased,
and the winner announced, on Saturday 21st January 2012 at First Fictions, a weekend of events championing first novels past and present, jointly organised by Brighton publisher Myriad Editions and the English Department at the University of Sussex.

"We were amazed by the quantity, quality and diversity of the entries," says Corinne Pearlman.

The seven shortlisted entries include six sole creators and a writer and artist team. They are:


Candidates had to submit between 15 to 30 pages of a graphic work in progress for consideration. The winner will be announced at the First Fictions event, organised by the University of Sussex and Myraiad, on January 21st 2012 and work from the shortlisted entries will be showcased there too. The outright winner will have their graphic novel published by Myriad in 2013.

• For more information, visit www.firstfictions.com
Posted by John Freeman at 11:50 am No comments: 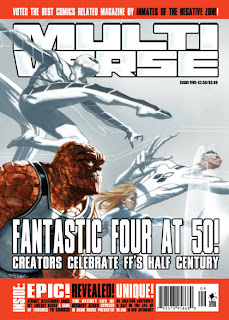 It's the magazine I, Vampire writer Joshua Hale Fialkov hails as “beautifully designed, with a modern, smart sensibility about mainstream comics that’s been missing from print comics journalism for a long time” -- and Multiverse will be available in the US for the first time in February.

In conjunction with Ardden Entertainment, British-based Hell Freezes Over is launching a US edition of its flagship title. Highly regarded not only by its readers but also by comics professionals, whether they be writers, artists, editors or publishers, Multiverse is the full colour magazine that prompted one reader to say: “The content is informed, easy to read, lacks post-modern nonsense and packed into a well-structured format. I loved the balance of popular heroes and emerging or independent coverage with what comes across as educated and balanced prose.”

Multiverse is Britain’s leading comics magazine. Promotionally priced at $4.99, the first issue of the 68-page American version is being offered on page 239 of the current Previews (for February-shipping product) under order codes DEC110838 and DEC110839.

Discussing the title, publisher/editor Mike Conroy said, “Its main focus will unashamedly be the popular – read commercial – end of the business. That’s not just the ubiquitous superheroes but Star Wars, Star Trek, G.I. Joe, Transformers and similar spin-offs and licenced titles alongside zombies, vampires and other such horrors.

“Even so,” continued the veteran comics author/historian, “we certainly won’t be neglecting the innovators out there on the cutting edge, whether their print run is 100 or 100,000. We’ll be covering their latest titles as they continue to expand the boundaries of our medium.

“My goal has always been to produce an entertaining title that occupies the middle ground between the late Wizard and the moved-to-another-plane Comics Journal, " he added. "That is, just straightforward reportage without to the hype or the cerebral dissection.

"I think Multiverse is that magazine.”

• More info: www.multiverse-magazine.com
Posted by John Freeman at 10:22 am No comments: