Can't see the the UK Guardian ever doing this: or getting as much feedback -- some 5000 readers replied - on a newspaper's plans to alter its comic strip section.

Strips to vote on here:

www.kansas.com/mld/kansas/entertainment/comics/15244087.htm
Posted by John Freeman at 9:53 am No comments: 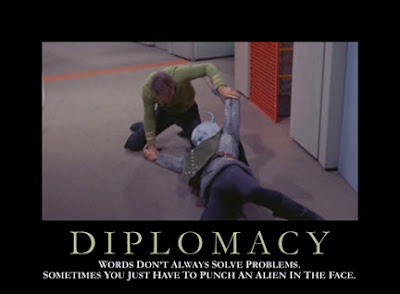 Some don't work, but when they do, they really do. Plenty more of these unofficial images at:
echosphere.net/star_trek_insp/star_trek_insp.html
Posted by John Freeman at 12:17 pm No comments:

There might not seem to be much going on at downthetubes -- but you'd be wrong. It's all "under the bonnet" stuff though -- tidying up images folders, a revised links section which hopefully makes more sense to visitors.

The image flder changes were brought on by increasing "bandwidth theft" problems that I hope I've solved with a few technical tweaks to stop direct links to images on my site. I don't like doing this -- but it was starting to cost me money.

On the writing front, there's a cartoon project that looks as though it may finally see a wider audience after three years of writing it, with Nick Miller on the art chores. Fingers crossed...
Posted by John Freeman at 10:45 am No comments: