TV21s for Sale on ebay 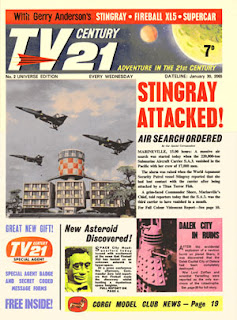 I have begun selling my copies of TV Century 21 on ebay. The first issues are #2 (with the free sticker badge given away with the issue), #79 with a Thunderbirds cover and #84 with a Stingray-related cover. 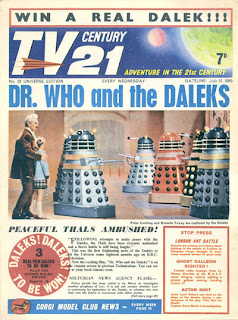 Also on offer are three Dalek cover issues of the classic 1960s comic: #28 (which includes several features on the Amicus Doctor Who and the Daleks film starring Peter Cushing) #36 and #50.

Posted by John Freeman at 3:53 pm No comments:

Variety reports US publisher Marvel Comics is putting some of its older comics online, hoping to reintroduce young people to the X-Men and Fantastic Four by showcasing the original issues in which such characters appeared.

Marvel Digital Comics can only be viewed in a web browser, not downloaded, and new issues will only go online at least six months after they first appear in print. The comics, which include early issues of The Amazing Spider-Man, will be available to subscribers only, although the service includes a number of free samples available, too).

Three different viewing modes will be available: traditional single and double-page formats, and a new proprietary viewer called "Smart Panel," which Marvel says will take readers "panel-by-panel through the comic book in a smooth, action-packed progression."

The archive can be searched by character, creator, title, and date of publication. Member ratings will be used to recommend user favorites. And users will be able to share their personal reading lists with other members.

About 2,500 issues (some re-coloured for this new format) will be available at launch of Marvel Digital Comics, with 20 more being released each week.

The publisher hopes the move will help familiarize younger readers with the huge range of characters they own, but as yet there's no word on whether the digital editions will include output from Marvel UK such as Captain Britain, Death's Head and Warheads. (Marvel US hold film for many of Marvel UK's US-sized titles).

"We wanted to find a way to get more people to take a look at our comic books," said Dan Buckley, president of Marvel Publishing told the Washington Post. "Comic-book fans are Web-savvy," Buckley said. "We feel like it's a good overlap with our core demographic."

"We look at anything that connects comics to people," Levitz said. "The most interesting thing about the online world to me is the opportunity for new forms of creativity ... It's a question of what forms of storytelling work for the web?"

There's also hope that by offering online "tasters" of new comics as well as archive material, this will boost sales of print editions. (DC offers weekly trailers from its Vertigo imprint, and downloadable PDF files of the first issues of certain series, timed to publication of the series in book or graphic novel format).

Reaction so far from comic shops has been mixed with some fearing it will damage back issue sales and their business in general while others hope it will generate new business by introducing characters to young readers.

Matthew Klokel, who owns Fantom Comics in the US, was enthusiastic. "I think it's a great idea, the told the Washington Post. "It'll get more people reading comics. Hopefully, it'll get people comfortable with some of the characters and they'll decide they want more," he said. "I think it will be a gateway drug to further comic book reading."

Posted by John Freeman at 9:01 am No comments: 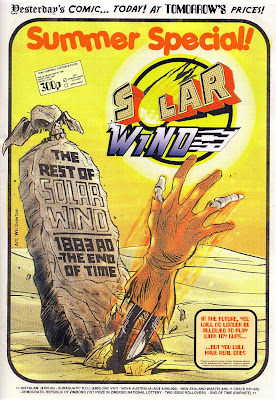 The final issue of the award winning parody and homage to British adventure comics of yesteryear Solar Wind has just been released.

Winning National Comic of the Year as well as being nominated for an Eagle Award, it has also won SFX Magazine's fanzine of the month and critical acclaim.

Now, just in time for Christmas, the Solar Wind Summer Special hits the virtual shelves of 21st Century digital newsagents with 68 Pages of frankly irresponsible levels of cosmic energy emanating from the stories, articles and nonsense within.

The Summer Special is the final issue of Solar Wind and features such favourites as Griefbringer, the dramatic end of Deathrunner, as well as the final revelations of Gingerbread Colditz, articles by downthetubes contributor Jeremy Briggs and much much more…

Editor Paul Scott will now be concentrating his creative juices on his SF title Omnivistascope and is full of priase for the the many creators who have helped and contributed to Solar Wind's success over the last five years.

• Issue 6 of Solar Wind and Issues 1 and 2 of Solar Wind spin-off Sunny for Girls are still available for just £1 (plus £1 P&P) each.
Posted by John Freeman at 4:53 pm No comments: 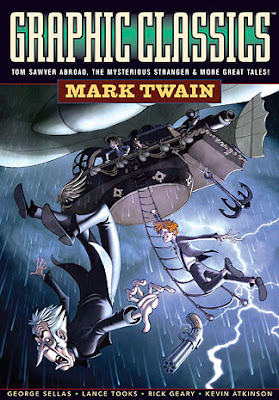 • Graphic Classics: Mark Twain is available from amazon.com and amazon.co.uk, and is in bookstores, comics shops, or direct from the publisher at www.graphicclassics.com.
Posted by John Freeman at 1:10 pm No comments: 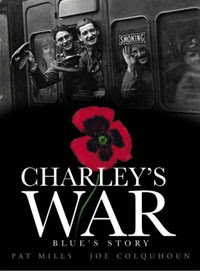 Battle's acclaimed Charley's War continues at Titan Books with the timely release of a fourth collection of the World War One tale.

Home from the war thanks to an injury, Charley escapes from a terrifying air-raid, only to run into a deserter from the Foreign Legion - who tells him of the awful siege of Fort Vaux, even as both men run for their lives from the Military Police.

Rich in the detailed minutiae of the terror-punctuated existence of a Tommy, this fourth volume features a brand new introduction by Whitbread prize nominee Tariq Goddard, commentary by Pat Mills, plus an exclusive bonus feature on the Battle of Verdun.


• Mike's now working on a mini-comic which takes up the story where this leaves our Earth-bound explorers. For the latest strips and more information check out www.exastris.co.uk
Posted by John Freeman at 1:39 pm No comments:

• For the latest strips and more information check out www.exastris.co.uk
Posted by John Freeman at 1:37 pm No comments:

• For the latest strips and more information check out www.exastris.co.uk
Posted by John Freeman at 1:36 pm No comments:

• For the latest strips and more information check out www.exastris.co.uk
Posted by John Freeman at 1:36 pm No comments:

Digital Spy posted a round up of the status of US shows in production affected by the Writers Guild strike at the weekend. 4,000 attended a protest rally on Los Angeles' Avenue of the Stars as the strike completed its first week, with production on night time chat shows already shut down and some networks with just six weeks left of first run material.

There have been rumours that US studios are scouting for UK writers, but UK writers downthetubes has contacted have not commented on whether they would strike break or not. (The Writers Guild of Great Britain has pitched into the Hollywood battle over digital distribution rights, calling for UK writers to support the strike and not supply material to US broadcasters).

The dispute is complicated but is essentially over the payment of residuals for internet and DVD use of writers' work. (The UK Writers Guild says it has been able to negotiate satisfactory terms with UK broadcasters covering DVDs, internet downloads, mobile phones, etc.: details here).

Writer Mark Evanier explains in plain English how the residuals system works on his blog here and this YouTube video outlines it for those of you who don't have time to read:

Not for the first time, writers are getting a poor (i.e no) deal at the hands of the US networks: writer Paul Dini recounts how he and many others were treated by Nickelodeon when they joined the WGA in an effort to secure residuals for their work back in 2001 in this blog post. "They destroyed three people’s careers and put 250 artists out of work and f***** up their own channel for a year," he angrily recounts.

Here's details on the SF/Fantasy shows alone and a full list of showrunners supporting the strike appears on the WGA web site.

NBC
Heroes: The Heroes: Origins spinoff has been suspended. 11 episodes taped. It is understood that NBC is planning for the December 3 episode to serve as a season finale in the event of a protracted strike, with the show returning for special episodes in the run-up to 2008-09. Tim Kring supports the strike.
Journeyman: Production continues. (Sky has started airing the show here on Thursday nights at 10.00pm). Producer Kevin Fails supports the strike
Medium: 9 episodes out of a 22 episode order completed.

Despite the serious matters at stake with mass layoffs, the team of the US The Office have delivered their own inventive take on the strike from the picket line, inviting lawyers to write their shows as they have proven so creative at not paying residuals...


Films affected by the strike are those Comics2Film cites as on the cusp of going into production: projects like Wolverine, The Punisher: War Zone, G.I. Joe and Justice League. Should the producers of those films decide the scripts aren't ready for filming, work could halt until guild writers return to their posts.

DreamWorks/Paramount's Transformers 2 is far enough along to proceed with pre-production, location scouting and advance visual effects work, but will face serious issues if the strike continues for several months. Filming isn't set to start filming until June.

Movies that have been filmed for 2008 release - Iron Man, Incredible Hulk, The Dark Knight, Whiteout, Hellboy II and others - are unlikely to be affected by the situation.
Posted by John Freeman at 8:44 pm No comments: