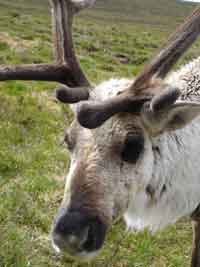 ... as in five days of being in Scotland, where the only sight of the World Cup was a brilliant cover for the Scottish Daily Mirror urging Trinidad and Tobago on. Oooh, and I will admit to checking the score of that match but other than that being in a farm cottage miles from anywhere surrounded by soay sheep (above: they might look they're about to stampede but it's only away from us, as fast as possible. Apparently they're impossible to herd with sheep dogs which does not surprise me, we had visions of poor collies looking well over ten trying to do it when they were only two) and visiting the Cairngorm reindeer herd pretty much beats the World Cup easily.

Had a wonderful break really, even if I did come home to the usual spam mountain (does anyone really order red pills from someone they've never heard of?). Plenty of interesting Star Trek news though, inevitably just after I'd filed my news copy for STAR TREK Magazine -- the fan film "Gods and Men" which is being directed by Tim Russ sounds quite interesting.

In the 'real' post was a copy of Comics International #197, complete with an all-new Really Heavy Greatcoat especially for the magazine and the second of four Doctor Who features (one not by me) which I think came out rather well. The magazine's getting something of an overhaul as it approaches its 200th issue, living up more to the "International" in the title, I think.

There's some good buzz about the new Superman film: those who've already seen it say it's pretty good, although the first hour is apparently better than the first.

Over at Virtual-Lancaster , it seems plans to switch to a content managed based site are coming along nicely. That's welcome news, it's something we've been trying to do for well over four years...
Posted by John Freeman at 5:32 pm No comments: