It has been going on in earnest since October when David Tennant announced that he would be standing down as the Tenth Doctor after the four Doctor Who specials in 2009 and speculation went into overdrive as to who would replace him. Indeed it was all part and parcel of the teaser for the 2008 Christmas special with David Morrissey as "The Next Doctor".

It did look like 2009 would be a long year on the "Who is the new Who?" speculation front as the specials came and went before a potential regeneration at Christmas 2009. But, thankfully, it is not to be.

The Eleventh Doctor is due to be revealed during the broadcast of a special Doctor Who Confidential on BBC1 at 1735 on Saturday 3 January.
In 26 hours we will know who will be Who.
Posted by Jeremy Briggs at 4:18 pm No comments: 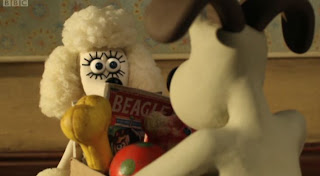 Wallace and Gromit had a triumphal Christmas with the new story A Matter Of Loaf And Death topping the TV ratings while their film, Curse Of The Were-Rabbit, made it to number eight. Of course all the publicity surrounding the duo's return didn't hurt with them appearing on the BBC1 Christmas Idents as well as stealing the cover of the Christmas Radio Times away from Doctor Who.

One of the delights of any of the Wallace and Gromit stories is the number of in-jokes that the film makers can incorporate into the plot or, more often, onto the screen. The first was big and, to many, pretty blatant. The co-writer of A Matter Of Loaf And Death with Nick Park was Bob Baker, one of the co-creators of Doctor Who's (or now more accurately Sarah-Jane's) K-9, so it was really no surprise that the first of the bread bakers to be killed off in the story was Baker Bob.
That said the best of the in-jokes for me was when Fluffles the poodle returns Gromits's things to him. In the box amongst vinyl records by Doggy Osmond and McFlea and a soft toy Bagpuss is a comic. Gromit reads The Beagle and the prop is complete with accurate Eagle title box and title font.
It is the little things like this that make Nick Park's two best known characters such a delight to return to time and time again.
Posted by Jeremy Briggs at 8:00 am 1 comment:

So Christmas is over and the New Year celebrations are a vague memory, even if they only were last night. Your 2009 Dennis The Menace calendar is set to January, the Beano and Dennis annuals are both read and you have started the excellent History Of Beano book whilst wearing your Christmas presents of Dennis and Gnasher socks and sipping your warming coffee from your Beano mug and the New Year is stretching out in front of you. Feel like doing something a little more active this year?

Mencap, the British learning disability charity, have used DC Thomson's Dennis The Menace character for some years to promote their activities and continue the theme in 2009 by entering Team Menace in various marathons and shorter runs around the UK and further afield. They will be at the Flora London Marathon, the Bupa Great Manchester Run, the Bupa Great North Run in Tyneside and are even planning to field a team in the ING New York Marathon. Mencap entrants for these events receive a Dennis The Menace team vest as well as training advice and guaranteed entry to the runs.

More details of the runs that Mencap will be participating in in 2009 are available on the Mencap website.
Posted by Jeremy Briggs at 7:45 pm No comments: