Who Is John Freeman? 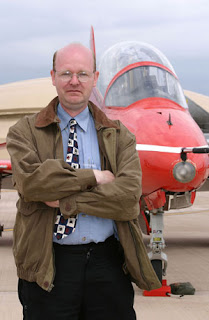 "If a person is not talented enough to be a novelist, not smart enough to be a lawyer, and his hands are too shaky to perform operations, he becomes a journalist..."
Norman Mailer

I'm a writer, editor and creative consultant for books and magazines based in Lancaster, England.

I work full time work for ROK Comics, part of ROK Global, which resumed in July 2009 but concentrating solely on formatting material for their WAP-delivered comics services in India and developing iPhone and Android apps to deliver content (among other things).

Launched in 2011, with some distribution hiccups (the title is printed in Bosnia), it's now on sale through UK newsagents.

Print Media has also published a small number of graphic novels including The Iron Moon by Stephen Walsh and Keith Page, Mirabilis by Dave Morris and Leo Hartas and Frontier: Dancing with Demons by Jason Cobley and Andrew Wildman. 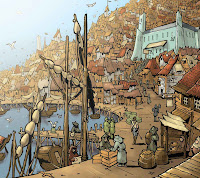 Crucible, which features art by Smuzz of 2000AD and Interzone fame, is one of the strips in the news stand edition of STRIP.

I had my first book, Sci-Fi Art Now, published in 2010 by ILEX in the UK and Harper Collins in the US. It's a collection of some of the best in contemporary science fiction art by a wide range of creators and includes an introduction by the legendary Chris Foss, published in the UK by ILEX and in the US by Harper Collins. A full list of artists featured, together with links to their web sites, appears on the book's blog, which also features interviews with many of the artists.

My freelance work, which was full time between 2000 and 2006, includes editing various classic comic collections for Titan Books and reviews for Star Trek Magazines.

I have also edited some of the British comic collections being published by Titan Books, including their Dan Dare range, Charley's War and the first volume of Johnny Red.

When I have time, I also contribute to various magazines and the SF web site SciFiPulse and I run the downthetubes web site, blog and forum.

In the comics world I'm writing a variety of different strips including strips for Print Media; Ex Astris, a new SF strip. The Really Heavy Greatcoat, which I wrote for over 20 years is currently on hiatus.

In addition to this web site I run a Mobile Comics Blog, reflecting my interest in this comics form - news stories are very welcome!

• Between November 1999 until December 2000 I was working as Project Manager for the online community-based site VZSciFi. That job included the creation of the framework for a new "virtual chat zone" using avatar technology. It was all great fun, and mixed a lot of what I have been doing for nearly 20 years - editing SF magazines and comics - with new media applications. Unfortunately, it seems the technology was ahead of its time and the US parent Avaterra.com pulled the plug on many of its operations just as its European arm was about to secure some major media deals. VZones is now back up and running and has a new project, The Second Kingdom, which is doing well.

• Until November 1999 I was Managing Editor at Titan Magazines in London, publishers of a wide range of licensed science fiction magazines. My managerial duties included the hands-on editing of Babylon 5 Magazine, Star Trek Magazine and Star Wars Comic, and overseeing the creation of Buffy the Vampire Slayer, Star Wars Magazine, The X-Files, Xena, Simpsons Comics UK and Manga Max. Titan Magazines is part of the Titan Publishing Group, publishers of Titan Books and owners of many Forbidden Planet (London) shops.

• Prior to this, I was Director of the Lancaster Literature Festival.

• Between 1987 and 1993 I was at Marvel UK and my work there included editor of Doctor Who Magazine and, later, several Marvel UK titles, including Death's Head, Warheads, Motormouth (its last few issues) Digitek and the weekly Overkill. I also wrote a few comic strips for Marvel (among them, Warheads and Shadow Riders).

According to several Doctor Who fans I am descended from werewolves (a long running joke in the pages of the gone but not forgotten Fanmail fanzine. This has been attributed to my inability to shave on a daily basis and the fact that I never sleep when there is a full moon.

• Editing the launch issues of RAF Magazine and ongoing issues of Star Trek Magazine for Titan Magazines; editing various comics for the same company, including Planet of the Apes, Star Wars and Simpsons Comics. I also wrote a "Clapperboard" column on new film and TV projects for Dreamwatch.

• Raptus Convention in Norway: helped arrange guests for their 2003 convention


• Working as a volunteer with a great local Lancaster team on Virtual-Lancaster.net

• Worked with Ian Wheeler on Eagle Flies Again, a fanzine about old British comics. The last issue was published in May 2006 but lives on in the features section of this web site

• I also edited the now defunct Lancaster-based events listing magazine Off The Beat, a direct descendant of On the Beat, which I started in 1984.