The Guardian newspaper listings magazine, 'The Guide', features a Bryan Talbot cover and three pages of interior art as he introduces a history of British comics (part of the build-up to Comics Britannia on BBC4 on Monday night at 9pm).
Posted by Richard Sheaf at 3:46 pm No comments:

The Bumper book of Look and Learn

The Bumper Book of Look and Learn is now out!
Sub-titled the best of the classic children's magazine this lavishly produced volume 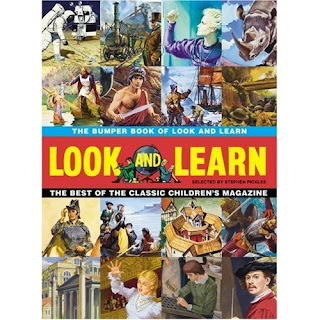 (produced by Century Books) is available in the shops for £18.99. Featuring an array of pages from just some of the 1,049 issues of issues of Look and Learn this coffee table style book takes a chronological look at human history from the dinosaurs to man's conquest of space. While some will doubtless be interested in the complete 'Trigan Empire' tale featured in the volume, the majority of interest should come from the 'ordinary' pages (and they are far from ordinary featured. The book features page after page of (actual size) illustration by British comic luminaries, and Look and Learn stalwarts, such as Ron Embleton, CL Doughty, Angus McBride, Peter Jackson, Patrick Nicolle and many more besides. Full colour reproductions on thick, glossy pages make this inch-thick volume a seriouly hefty tome.
The only quibble I have with the book in fact is that there is no index listing which illustrations come from which issue, thereby denying you the chance to track down a particular original issue if the artwork particularly grabs you.
There are plenty of books around at the moment celebrating our comics heritage but the others will have to go some way to beat this volume in terms of value of money, quality of art and qualityof production. It's a winner!
Amazon currently have it listed at 40% off, unbelievably, check it out here....
http://www.amazon.co.uk/Bumper-Book-Look-Learn/dp/1846052912
For reference the ISBN is as follows: 978-1-846-05291-0


Posted by Richard Sheaf at 8:26 pm No comments: 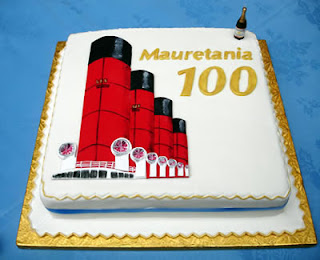 ROK Comics creator Chris Reynolds is one of several artists involved in events marking the centenary of the maiden voyage of the RMS Mauretania.

Chris has published several strips under his Mauretania Comics imprint.

On 16 November, there will be events in both Newcastle and New York to mark the centenary of the sailing, at the bar of Newcastle Arts Centre and at a venue in New York, with a centenary phone call between the venues. Paul Harvey and Chris Reynolds will be in Newcastle, while representatives of US Stuckist groups, joined by New York Stuckist Terry Marks and Connecticut Stuckist Tony (Baloney) Juliano will be in marking the event in the US.

The Mauretania was the longest-ever holder of the famous transatlantic speed record, the Blue Riband. Built in Newcastle, she sailed the line between Britain and the New World completely successfully for 25 years.

A quick plug for a brilliant interview with Hugo Tate creator and long-time-ago Marvel UK co-worker Nick Abadzis over on the Comics Reporter site.

Nick talks about one of his latest projects, Laika, one of the first books announced for the First Second line. "Signing Abadzis to a book-length, full-color project did as much as anything in staking out that publisher's unique artistic niche," writes Tom Spurgeon. "The story of the world's first space traveler, a dog sent up in the Soviet space program, Laika is a curious and engaging mix of moods, approaches, formal strategies, soap opera, psychological profiling and history."
Posted by John Freeman at 5:07 pm No comments:

(with thanks to Lew Stringer for the link): A top Sky boss has admitted the much-touted The Prisoner remake, rumoured at one time to have starred Christopher Eccleston, has been dropped.

In a recent interview for news site Digital Spy, Richard Woolfe, head of Sky One and offshoots Sky Two and Three, revealed the project had been abandoned.

"The Prisoner is not happening," he explained. "It's a very quintessentially British drama and there were too many creative differences trying to share it with an American partner. I didn't want to be responsible for taking something that is quintessentially British and adapting it in a way that I didn't feel was reflective of the way people would remember it and the way people would want it to be. So we called time on that."

Granada International announced last December that it had joined up with US movie network AMC to co-produce a new version of The Prisoner for Sky One, based on the cult 1960s show which starred Patrick McGoohan.

It was expected to go into production in the spring and premiere in 2008, based on scripts written by Bill Gallagher, creator and writer of Conviction and Clocking Off.
Posted by John Freeman at 3:49 pm No comments:

Email ThisBlogThis!Share to TwitterShare to FacebookShare to Pinterest
Labels: TV 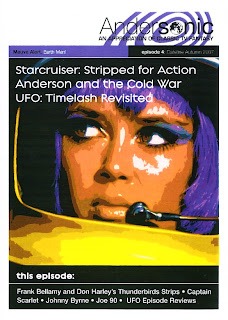 The fourth 'episode' of Richard Farell and Vincent Law’s Gerry Anderson fanzine is now out. Amongst the articles and reviews of the Gerry Anderson series Captain Scarlet, Joe 90, UFO and Space:1999, are articles on the comic strips associated with the Anderson universe.

Frank, Don, Dan and the Traceys covers the Anderson related work of the two Dan Dare artists Frank Bellamy and Don Harley, while Starcruiser: Stripped For Action covers the torturous history of the Starcruiser design concept which ran for two years as a comic strip in Look-In and eventually became an Airfix kit.

Andersonic Four consists of 40 A5 pages with a colour cover. It is £2.00 including UK postage and is available via paypal payment to strakerATmerseymail.com or by cheque or postal order to R.Farrell, 11 Stevenson Drive, Spital, Wirral, CH63 9AH.
Posted by Jeremy Briggs at 3:48 pm 1 comment: