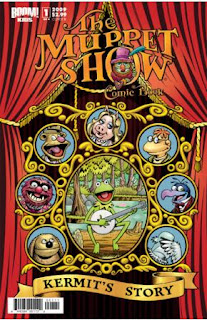 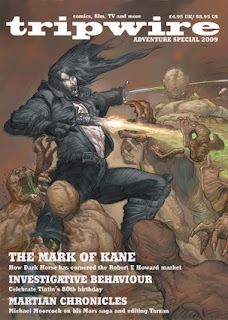 • Tripwire on the web: www.tripwire-magazine.com blog
Posted by John Freeman at 2:56 pm No comments:

Keith Page: Raiding the Past and Future

Comics artist Keith Page, co-creator of the mobile strip Charlotte Corday, is one of the regular interior and cover artists on British publisher DC Thomson’s Commando as well as writing and illustrating the Dan Dare prequel Rocket Pilot in comics magazine Spaceship Away.

As a part-time artist he worked on UK titles such as 2000AD, Dan Dare and TV Comic annuals before going full time illustrating Thunderbirds and Stingray in the national newspaper The Sunday Times.

Now, in an exclusive interview, Jeremy Briggs talks to Keith about his varied career for the main downthetubes site, including his work in the mobile comics arena with his creator-owned strip Charlotte Corday.

Plus, working with a number of other British comics experts, we're pleased to present a detailed stripography charting Keith's work down the years.

Salmon's Spot on the Net 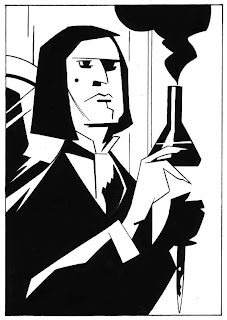 (via Kasterborous): Comics artist Adrian Salmon, whose credits include work for Judge Dredd: The Megazine, Doctor Who Magazine and the graphic novel The Faceless: A Terry Sharp Story has recently begun a blog, which includes many samples of his recent work and background on how he created them.

Included are Doctor Who illustrations and samples of his work on the Hammer Horror tribute publication Little Shoppe of Horrors like this one of Doctor Jekyll. (Megazine readers may recall one of Ade's characters for a Judge Karyn story I wrote bore an uncanny resemblance to Peter Cushing...)

Thos of you reading this that live in Manchester may also like to know that the Lass O'Gowry has a room dedicated to Ade's work. If that isn't an excuse to nip there for a pint...

Adrian's blog is at: adriansalmonart.blogspot.com

Posted by John Freeman at 9:50 pm No comments:

• Insomnia Publications publisher Crawford Coutts has just done an interview on Jazma which covers how he came to found the company, his views on the comics industry and his big plans for the future. Read it here. The company also has two new previews of its titles on myebook.com: Damaged Goods by Richard McAuliffe and Mark Chilcott (right) and MILK by Stref, which has been earning plnety of attention, nit least from 2000AD scribe Alan Grant who describes the book as containing "some of the most beautiful, expressive art that I've seen in a long time. It deserves to be a huge commercial success".

• We missed Dave Gibbons "significant birthday" yesterday, but fellow professional Chris Weston didn't and marks it with a fab Birthday Card on his blog. "Dave Gibbons is The Governor," he insists, revealing the Watchmen, Martha Washington and Dan Dare artist and "has been a consistent inspiration and role model to me throughout my life and career." Hope it was a good one, Dave!

• Radio Times are running a promotion with iTunes where you can download 'Last of the Timelords' from series three of the new Doctor Who for free: www.itunes.com/drwhofree

• Darryl Cunningham is working on a new web comic, The Streets of San Diabolo, which you can read over on act-i-vate.com, along with Mugwhump the Great by Roger Langridge and many others...

• Forbidden Planet London will play host to a group signing to mark the release of the Torchwood: Rift War comic collection: Simon Furman, D’Israeli, Ian Edginton, Paul Grist and Brian Williamson are all due to appear on Saturday 25th April between 1 and 2.00pm.

• Tony Lee has confirmed he's writing a Land of the Lost comic with Sean O'Reilly for Arcana/Universal. The book will launch in June... that's the last we'll be hearing from him for a while, then... The story, based on the film, centres on Rick Marshall, his son Will, and younger daughter Holly, trapped in an alien world inhabited by dinosaurs, monkey-people called Pakuni, and aggressive, humanoid/lizard creatures called Sleestak. Geshundheit!

• Glenn Carter has posted a review of the much-lauded Tim Skinner: Total Scumbag on Comics Village.

• In the words of artist Shane Oakley (more about his latest project later): "If you're going cold turkey waiting for the next issue of Jack Staff, or never heard of the ridiculously talented Paul Grist, then drop everything and hurry your arse over to: http://www.bigcosmiccomic.blogspot.com". Don't argue with Mr Oakley. Go, go...

Compiled with thanks to Graeme Neil Reid and Nic Wilkinson. What, you're still here? Paul's waiting!
Posted by John Freeman at 2:26 pm No comments: 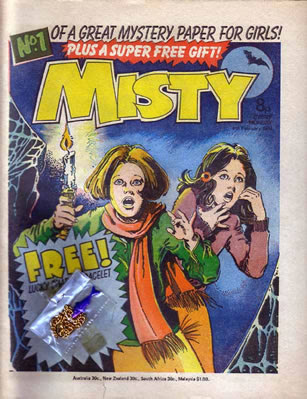 As we previously reported, Egmont UK will be publishing a 'classic collection' of strips from the ground-breaking girls comic, Misty, in December, distributed exclusively through WH Smiths. It will be the last of four collections of classic comic strips planned for the year.

As yet, content has not been decided, but you may have the chance to influence what goes into the reprint special. The official Misty Comic web site has just launched its poll of stories for inclusion in the Collection.

You can vote for as many stories as many times as you wish to try and get your favourites in the publication.

First published in February 1978, this mystery comic for girls ran until 1980 for 101 issues before being merged with Tammy. Ongoing strips included Moonchild, written by Pat Mills and others such as the rite of passage Cult of the Cat and more, but the comic featured many a one off story, making it a much more "Collection Friendly" proposition than Roy of the Rovers, on sale now seems to have been. (Quite why Egmont chose to select stories for this from the ongoing comic, rather than one-offs from the many holiday specials or annuals published down the years is a mystery in itself - as such, it's proven a bit of a disappointment).

Egmont's Classic Misty Collection should not be confused with the mistycomic.co.uk-initiated Special featuring new strips inspired by the title, which is still in preparation but includes strips by SMS and many others.

• Vote for Misty strips
Posted by John Freeman at 8:05 am No comments: