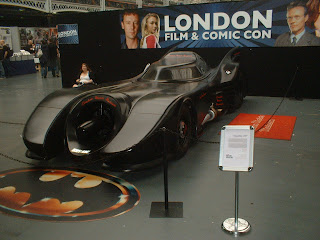 Talent from the world of comics included Lee Townsend and Mike Ploog. The latter was interviewed by Mike Conroy, providing an interesting and informative overview of the artist's career.

Cosplayers aplenty were in attendance with the likes of Darth Vader, Admiral Ackbar and numerous Stormtroopers walking around providing entertianment for attendees. The Batmobile was also in attendance.

Olypmia was a great venue, if a little trickeir to get to than Earl's Court, the LFCC's traditional home, and overall this was a fun and entertaining event as always.
Posted by Ian Wheeler at 11:25 pm