Just a quick look at a few of the titles that we can expect to see over the coming months... 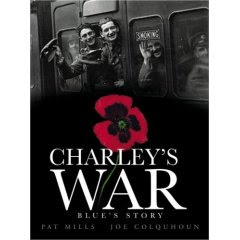 First up is Charley's War Volume 4, subtitled "Blue's Story". Continuing the story of World War One, this time the account takes in the French point of view with details of the battle of Verdun and the defence of Fort Vaux. The 'Blue' sub-plot covers the period February to March 1917 (in terms of its original publication in Battle, this was the six months from 11th October 1980 - 4th April 1981). For more information on this classic war story, check out, as I did, the fantasically detailed Charley's War timeline at.. http://charleyswar.tripod.com/id5.html 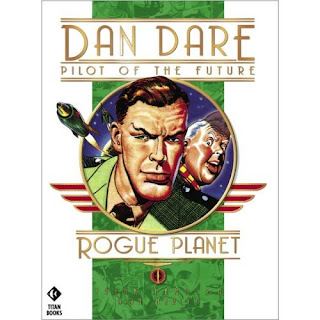 Also coming soon we have the next volume of Dan Dare reprints from Titan. The series of reprints is now approaching the high-water mark of Dan Dare storytelling with the Rogue Planet storyline. This epic storyline (it ran for over a year when originally published, from 2 December 1955 to 15 February 1957) follows the adventures of Dan, Dig, Lex, Flamer and Lero as they battle against the evil Crypts, who have invaded the peaceful world of the Phants.

This monster volume is a hefty £19.99 but the artwork is fabulous: it just glows on the printed page and the world that Hampson and his team created is so rich in detail as to be completely believeable. I'm a fan.

While it's a shame the Titan volumes aren't reprinting the stories the same size as they orignally appeared in Eagle (as Hawk Books did in the 1990s), it's great that the stories are being kept in print.

A word of warning: the previous volume, The Man from Nowhere, is an essential read if you want to know what's happening in this volume. The final volume in the Man from Nowhere trilogy is entitled Reign of the Robots, another corking read. Hopefully, Titan will be reprinting that one too. 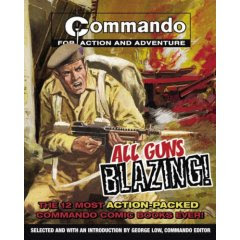 Also available for your autumn reading is All Guns Blazing!, 12 more tales of derring-do plucked from the pages of Commando by editor George Low. Given that there are 4000 plus issues of Commando (and even allowing for a proportion of those being reprints) the Commando archive has plenty of heroic tales to tell and it looks like DC Thomson are onto a winner with this format. Hopefully the emergence of two War Picure Library volumes will raise interest in these titles even further (and shows that imitation is the sincerest form of flattery). 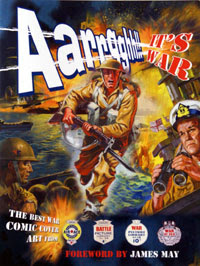 Last up is Aarrgghh!! It's War"the best of the covers from the War, Battle, Air Ace and War at Sea Picture Library. It, as the advert says, does exactly what it says on the tin. Lots of art from loads of great war artsits. Marvellous.

Posted by Richard Sheaf at 9:20 pm No comments: 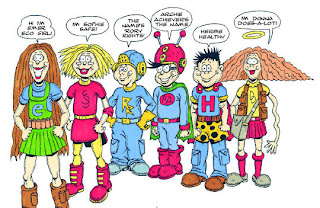 Hard on the heels of 2D, the Northern Ireland Comics Festival in April, comes another Northern Ireland comics project, The Super Six, published by OFMDFMNI:CYPU.
Okay, so it doesn't quite trip off the tongue like IPC or DCT and I doubt that many here actually know what it stands for (but then how many actually know what the D C of D C Thomson stands for without going and looking it up?). OFMDFMNI:CYPU stands for (taking a deep breath) the Office of the First Minister and Deputy First Minister of Northern Ireland: Children and Young People's Unit.
CYPU have created an education comic to be distributed free to all Northern Ireland's primary school children. The Super Six are six child superheroes embodying the six goals of the CYPU Children's Strategy. The twenty page colour comic, drawn Beano style, may set out to teach children but contains enough visual humour to keep the teacher or parent amused as well. For those outside the Province the entire comic, along with its accompanying Teacher's Guide, are available as PDF downloads with an audio version of the comic, read by professional storyteller Liz Weir, available as MP3 files.
More info at: www.allchildrenni.com/index/the-super-six.htm
Posted by Jeremy Briggs at 9:19 pm No comments:

For Action And Adventure 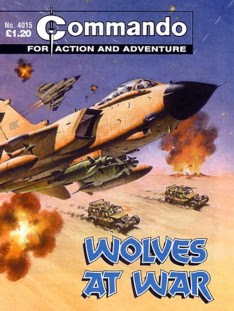 Those who still labour until the mistaken belief that Commando only covers the Second World War could do worse than checking one of the latest issues.

Commando 4015 : Wolves At War concludes the "Log Of The Lairds" sequence of six stories, this one telling the story of a Scud Hunt during the Gulf War in 1991. Originally published as Issue 2709 in 1993, it was written by Alan Hemus with internal art by Gordon Livingstone and a wraparound cover by Ian Kennedy.

Alan Hemus wrote all six of the Laird stories, just some of his many contributions for DC Thomson over the years. Gordon Livingstone was a DC Thomson stalwart drawing some 360 different Commando stories beginning with issue 4 in 1961 as well as providing many pages of art for the Thomson weekly comics and their annuals. Ian Kennedy, despite having over 1000 Commando covers to his credit, continues to paint new covers to this day with his latest being Issue 4018, Military Mule!
Posted by Jeremy Briggs at 5:04 pm No comments:

ROK Comics, the UK-based online and mobile phone creative aggregator and publisher of comics and cartoons have announced a competition with a prize of $10,000 (£5,000) for the best original comic strip or cartoon published it receives between now and the end of July 2007.

In addition, ROK are offering the winner of the prize the opportunity to feature front-and-centre online under a new section of the ROK Comics website to be called ‘HOT TALENT.’

ROK Comics is a new opportunity for publishers and creators to reach a worldwide audience who will be able to download the comics via Pay Per Download or subscription via Multi Media Messaging (MMS).

“The mobile phone is the perfect delivery vehicle for comics. The back lighting provides incredible vibrancy and the MMS presentation format we have chosen works across almost all phones and network operators” commented ROK Comics Managing Editor, John Freeman.

In addition, ROK Comics offers "FreeFall Comics" – an advanced Flash-based web service enabling anyone to create strips using their own photos along with ready-made characters and backgrounds that can be delivered to mobile and email.

With access to millions of handsets through existing Mobile Network Operator Agreements, ROK Comics can deliver digital comics straight to mobile handsets and collect revenue for doing so.

Creators publishing professionally via ROK Comics will receive 50% of the available revenue on every sale, with full access to sales statistics, viewings and more.

Publishers can also create Free Samples of strips that can be viewed online and on mobile to promote their print editions, and let fans know about them by e-mail, and provide an "Embed" of a strip, which can be posted on web sites, blog or company site.

John Freeman, a veteran of the comics and magazine world is spearheading ROK Comics, part of ROK Media. John was previously an editor for Marvel UK, Titan Magazines and a number of independent publishers. At Marvel, he edited Doctor Who Magazine and several of the company's US titles such as the best-selling Death's Head II. He was also editor of Star Trek Magazine and oversaw the launch of titles such as Star Wars Magazine, and the UK editions of Simpsons Comics.

“John and I have been looking at the potential for comics on mobile phones for some time and now, with advances in handset technology and ROK’s huge distribution network, we have finally made this a reality. We believe that this is a great mass market opportunity for creators and publishers alike. By enabling mobile delivery, syndication of their creations is now instantly possible, generating real revenue and we’re delighted to be offering this fantastic cash prize for the best original content we receive.” Said Graham Baines, CEO, ROK Media Ltd.

ROK Comics is available via mobile and the web at www.rokcomics.com. ROK Media is a wholly-owned subsidiary of ROK Entertainment Group who announced in May this year they had agreed to be acquired by US publicly-listed company, CyberFund (OTC: CYFD) in a Share Exchange Agreement.
Posted by John Freeman at 12:31 pm No comments: