Shameless plug time. Colin Baker, the sixth Doctor Who, will be making a personal appearance at the Fab Cafe in Leeds on Sunday 12 August 2007. The event is co-organized by downthetubes contributor Ian Wheeler and should be a good one.

There will be an interview with Colin, questions and answers, autographs and a charity raffle. More details at www.colinbaker-fab.co.uk.

Colin is of course just about the only person we can think of who has both appeared in comic strips and written one.
Posted by Ian Wheeler at 9:32 pm No comments: 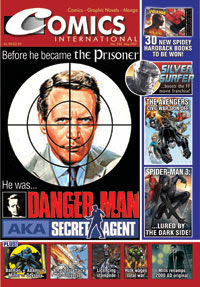 It's been an unsettled few months for Comics International but the new issue is a corker. Down the Tubes writers Ian Wheeler and John Freeman, along with Dez Skinn, continue their look at comics based on cult TV shows by examining Danger Man (look out for The Prisoner soon).

Ian Wheeler
Posted by Ian Wheeler at 9:16 pm No comments: 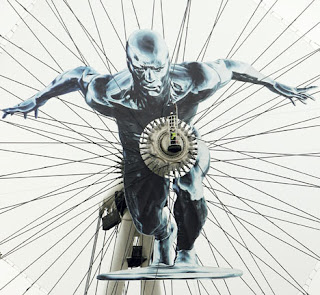 As part of the publicity blitz for the new FF movie ("Rise of the Silver Surfer") the London Eye was taken over by the Silver Surfer this week when he, literally, flew into it. This is the first time that the Eye has been used for publicity pranks like this but perhaps we see more in the future, Hulk smash London Eye for instance? Magneto, er...magnetise London Eye?
You get the idea.

Everyone who knows me also knows I am one of the world's worst typists and probably semi-legendary for minor typos. But that doesn't mean I can't spot one, and one that constantly annoys me is the misuse of its and it's.

I've been guilty of it myself, to the extent that in exasperation, the difference was drummed into me by Sheila Cranna and Louise Cassell at Marvel UK. (They even pinned a large note to my wall about "Its NOT It's!" above my desk while editor of Doctor Who Magazine).

It's is a contraction of two words: it is. Its is possessive, like whose and his and hers. But so many people get it wrong...

Trust me, it's not just BT that makes this error in advertising. I've seen it on hight street store advertising from Ethel Austins and others. Even on A-Boards, which aren't exactly cheap to make...

(Found on the GSE English site)

Does it really matter? After all, English is an evolving language. We don't use English the same way as Chaucer or Shakespeare, or Dickens.

Well yes, because this isn't a spelling error. It's a basic grammatical error that big companies cannot seem to get their head around, and my feeling is always that if they can make such a basic error as this, then what other basic mistakes are they making?

Grr. Let the Grammar Wars begin... although I've just discovered the often controversial BadGas started it ages ago, and the creator of Bob the Angry Flower is of a similar mind on this one...

You can buy a poster noting other misuses of the apostrophe from the Angry Flower web site.
Posted by John Freeman at 8:25 am No comments:

Email ThisBlogThis!Share to TwitterShare to FacebookShare to Pinterest
Labels: Rants

Together, the group makes up a group called Sigma, whose motto is "Science Fiction in the National Interest was formed 15 years ago by to advise government officials. The last time the group gathered was in the late 1990s, when members met with government scientists to discuss what a post-nuclear age might look like.

To join the group, you have to have at least one technical doctorate degree.

"We talk to a lot of strange people and read a lot of weird things," Bear says. That research prompts all sorts of ideas the group would rather offer the government as a public service rather than work for some private think tank.

Dave Langford points out that once again sf proves eerily prophetic: wasn't there just such an ego-boosting think tank in the Niven/Pournelle novel Footfall?
Posted by John Freeman at 9:50 pm No comments:

Heh. Somneone's been reading the indy reports on the G8. I liked this one.

Posted by John Freeman at 2:48 pm No comments: