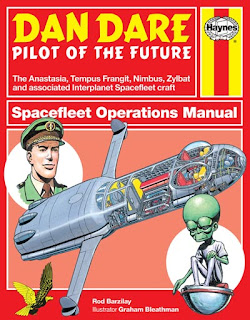 The Book: Dan Dare is easily the most famous British comic hero. His adventures appeared in the original Eagle comic during the 1950s and 1960s, but he also featured briefly in 2000AD before returning in the re-launched Eagle of the 1980s.

This innovative Haynes Manual takes a detailed look inside the spaceships, space stations and various other craft that played such a huge part in bringing the excitement of space travel to the stories.

Beautifully illustrated with cutaway artwork by Graham Bleathman, and supported by fabulous contemporary comic-strip art, this is the ultimate technical guide to the spaceships of Dan Dare and a wonderful addition to every comic fan's bookshelf.


The Review: Rod Barzilay and Graham Bleathman have brought back the world of the original Dan Dare with a vengeance in this fun collection, delivering not just some great cutaways of the strip's well-loved vehicles and craft, but also making a coherent whole of the original Dare mythos, placing it in its own universe - no easy task given the character's long history. (The modern versions of Dare are not included in this Manual, consigned, perhaps, to other parallel universes). 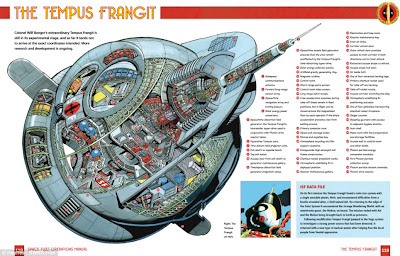 While I'm sure there are Dare enthusiasts out there who will nitpick details of the chronology Barzilay has crafted (I have no idea if any of it is "wrong"), for me, the author has delivered a wonderful guide to a fictional universe, accompanied by some terrific cutaways from Graham Bleathman.

While some of the cutaways and art have been previously published (in Spaceship Away) there's plenty that is new to savour, and unlike some Dare-related books, its official status means there's no shortage of art from the comic strip itself included. 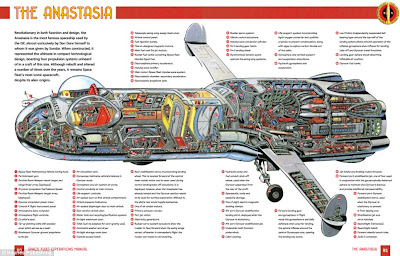 Back in its day, Eagle regularly published many amazing cutaways of real world ships, planes and other vehicles: it's wonderful to see the most memorable creation of Frank Hampson and his talented team put under a similar microscope in this Haynes Manual. The subject is treated with respect, but in a way that will rekindle an excitement and enthusiasm for the original in fans - and, hopefully, stir the imaginations of those new to the mythos.

There have been some who have commented on the format of the book: all the cutaways are printed across double page spreads and there has been some griping at the loss of some detail as a result. But to do as others have suggested - utilising gatefolds and landscape formats - would simply have made this marvellous title overly expensive, a barrier to bringing the world of Dan Dare to a new audience.

This is a glorious title, recreating the world of Dan Dare with aplomb. Worth tracking down - before the Mekon buys every copy for his spies!

Detail:
Based on the classic Dan Dare comic strip that appeared in Eagle magazine during the 1950s and 1960s, this Haynes Manual is fully authorised by the Dan Dare Corporation Limited.

• Read Jeremy Briggs interview about the book with Rod Barzilay

• Read Jeremy Briggs interview about the book with Graham Bleathman

• Haynes Dan Dare Page
Posted by John Freeman at 8:15 am