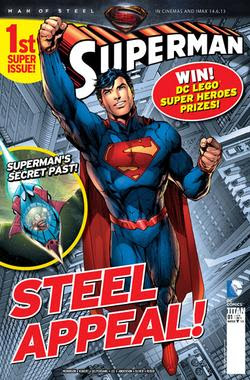 Timed to coincide with the release of new Warner Bros film, Man of Steel, the first issue of Titan Comics new Superman is on sale now.

Featuring Henry Cavill in the lead role and directed by Zack Snyder, the Man of Steel film will be released in cinemas on 14th June and will be darker in tone than previous incarnations - and so will the Superman comic.

Issue 2 goes on sale at the end of this month.

Action Comics – 'The Boy Who Stole Superman's Cape'
Here's an untold adventure from Superman's very earliest days in Metropolis - learn how he got his name, his crest, and discover the importance of his cape, as you share a day in the City of Tomorrow!
First printed in Action Comics #0

Action Comics – 'Rocket Song'
Delve into Superman's past as we turn back time to that fateful moment when baby Kal-El was jettisoned from is dying home planet of Krypton! What bigger role does the life-saving rocket that carried him to Earth still have to play in Superman's future?
First printed in Action Comics#5