Rainbow Orchid Prequel In The Phoenix This Friday 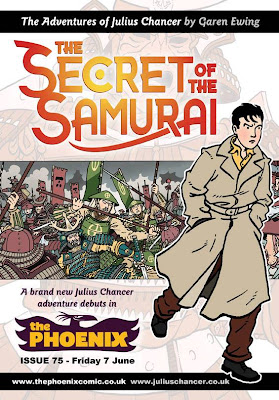 Artist and writer Garen Ewing’s latest adventure of Julius Chancer, The Secret of the Samurai, a prequel to his three book Rainbow Orchid saga, is starting a four week run in The Phoenix beginning this weekend. The twenty page adventure will be published in five page segments over four weeks beginning in issue 75 due on Friday 7 June and concluding in issue 78 due on Friday 28 June 2013.

The Secret of the Samurai takes place several years before the events depicted in The Rainbow Orchid. Talking about it in his blog, Garen says, “My plan is that one day I will do a connected but equally stand-alone story of the same length, so there's the possibility they could be published together as a complete book. This will not derail the full-length (60-80 pages) adventure I have plotted and ready to start - hopefully this summer.”

Despite recently becoming a father for the second time, Garen continues to attend conventions. He will be attending Stripped, the comics ‘festival within a festival’ at this year’s Edinburgh International Book Festival, where he will be taking part in three events on Sunday 25 August 2013. The full programme for the Edinburgh International Book Festival and Stripped will be announced on 20 June on the BookFest website. In addition, over the weekend of 19-20 October 2013, Garen will be selling, signing and sketching at the Lakes International Comic Art Festival’s Comic Clock Tower in Kendal in the Lake District.

• There are more details of all Garen Ewing’s work on his website and more details on The Secret of the Samurai and The Rainbow Orchid on his Adventures Of Julius Chancer website.

• The Phoenix comic is available from Waitrose supermarkets, Travelling Man and Forbidden Planet International stores, as well as a selection of other comics shops and book shops around the UK.

• There is more information about The Phoenix on the title’s website including a location guide to stores that sell it. Subscriptions and back issues are also available for those who do not have a local stockist.
Posted by Jeremy Briggs at 7:00 am