For most comics readers Graham Bleathman's name is synonymous with large detailed cutaway paintings of buildings, vehicles and flying craft both real and fictional. It was not surprising then that he is now the artist behind four of the new series of Haynes Workshop Manuals that feature fictional vehicles rather that the real cars that the publisher is best known for. The latest of these is the Dan Dare Spacefleet Operations Manual which has just been published.

Jeremy Briggs spoke to Graham about these new Dan Dare cutaways as well as the rest of his work.

downthetubes: You are perhaps best known for your detailed cutaways of Gerry Anderson craft from TV series such as Thunderbirds, Stingray and Captain Scarlet published in the various 1990s comics that covered those series and the large format hardback cutaway books that followed. When did your love of cutaways begin and did you set out to be a cutaway artist?

Graham Bleathman: I first came across cutaway illustrations in the TV21 (and related) annuals that I picked up mainly second hand in the early 70s. A handful of cutaways also appeared in TV21 itself, which I also started to collect at around the same time that I was buying Countdown every week. I never bought (or had bought for me) TV21 when it first came out, so I relied on second hand and charity shops in the early 70s, along with jumble and ‘bring and buy’ sales, where in those days comics like TV21 and Eagle could still be found reasonably easily. It was at these sort of events that I found my first few copies of Eagle, and was of course somewhat taken with the centrespread cutaways as well as the more well known strips like 'Dan Dare' and 'Heros the Spartan'.

I don’t think I set out specifically to become a cutaway artist; it just sort of happened after I left college. During my time at Exeter College of art, I painted a cutaway of Exeter Cathedral, which was followed a year or two later by cutaways of Salisbury Cathedral and a few other buildings which were commissioned by the Salisbury Journal newspaper. 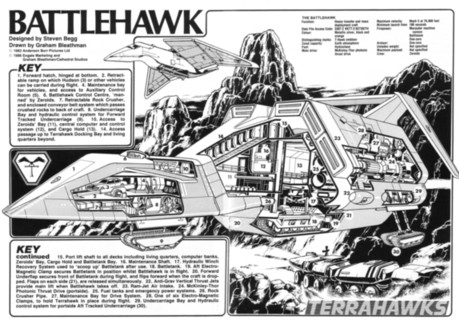 I was also involved in the Gerry Anderson fanzine SIG at the time, and I produced my first Anderson cutaway for that, which was a black and white illustration of the Battlehawk (SIG  issue 15, Spring 1986), from the then current Anderson production Terrahawks.

DTT: Other than the many Anderson cutaways and the Haynes Manuals, what else have you worked on?

Graham: I worked on quite a few magazines, comics, and other products over the years. Some have an Anderson link; drawing many of the covers for the Fleetway comics (for which I drew the cutaways of course), artwork for Anderson and Star Trek jigsaws, greetings cards for Space Precinct, illustrations of film/TV locations and cutaways for TV series features in Radio Times, Cult TV, Inside Soap (yes, I’ve illustrated EastEnders, Neighbours, Coronation Street and Casualty!). I seem to have drawn thousands of ‘Sketch Cards’ featuring the Anderson shows for a company called ‘Cards Inc.’ 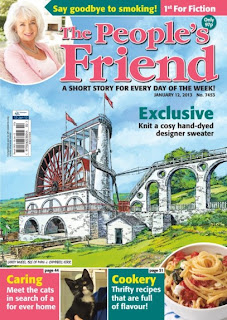 A few real world illustrations have been drawn too in more recent years, such as cutaways for the now defunct RAF Magazine, Radio Times and a few books. I also have a ‘secret life’ doing the covers for DC Thomson’s ‘People’s Friend’! Under the name ‘J Campbell Kerr’, a team of artists has painted the landscape illustrations on the covers of the magazine since 1946. I started around 7 or 8 years ago (although I did do a brief stint in the mid 1990s) and, since the death of cover artist Douglas Phillips last year, I now paint around half of them on average.

I have no idea why the 'J Campbell Kerr’ name has been used all these years; no one seems to know the its origins, and nobody wants to break with tradition!

DTT: Your work for Haynes began with the first of the Wallace and Gromit Haynes manuals, Cracking Contraptions, a book that sold so quickly that it had to be reprinted almost immediately it was published and has since gone to a third printing. After your second Wallace and Gromit book you moved on to the Thunderbirds Haynes manual which, given your artistic background seems an obvious choice, and now the new Dan Dare manual. Where did your interest in Dan Dare stem from and how did the Haynes manual come about?

Graham: My interest In Dan Dare originates through TV21; many of the artists on TV21 were poached from Eagle, and I began to notice the work of Frank Bellamy and others in Eagle as I started to pick up second hand copies. The Dan Dare stories seemed to have parallels with many of the concepts seen in the Anderson shows (particularly the way they were developed in TV21), such as a World Government and a (generally speaking) optimistic view of the future. 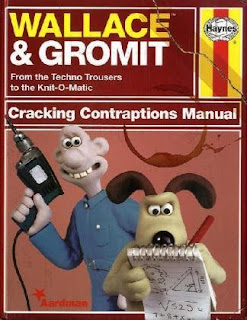 I became involved with Haynes when by bizarre coincidence both myself and the writer of the Thunderbirds manual (Sam Denham, with whom I have worked before on a couple of books) approached Haynes separately with a view to doing a Manual based on that series. Initially, Haynes weren’t too keen, but as they were moving into doing manuals based on fictional subjects anyway, they offered me the job of illustrating two Wallace and Gromit manuals instead, having seen my Thunderbirds artwork and in particular a Wallace and Gromit cutaway (of Wallace’s house) for the Bristol Evening Post. The Thunderbirds manual was therefore put on hold for 18 months or so. The success of the Wallace and Gromit manuals prompted Haynes to proceed with the Thunderbirds edition, and that has proved successful enough for them to commission something I had also thought about for a couple of years, Dan Dare. That book is now complete and I have returned to the Anderson world with another manual with Sam Denham to be published next year.

DTT: The writer of the Haynes manual, Rod Barzilay, is a familiar name to Dan Dare fans due to him creating and editing the long running Dan Dare magazine Spaceship Away. How did Rod come aboard and how did the pair of you sort out which spacecraft and other Dan Dare vehicles to feature in the book?

Graham: I knew Rod from Spaceship Away magazine, having initially met him at a Dan Dare ‘Open Day’ at an exhibition in Bristol a few years ago, at which Eagle and TV21/Countdown artist Don Harley was also present. I have since drawn around 10 or so cutaways of Dan Dare spacecraft (and real world locations such as the artists’ studios in Southport and Epsom), for SA over the years, and Rod’s knowledge of Dan Dare’s ‘fictional’ history made him ideally placed to supply the basic text of the book and provide the expert knowledge that I lacked; I almost got the impression that the future history of the Dan Dare universe was more real to Rod than our own! 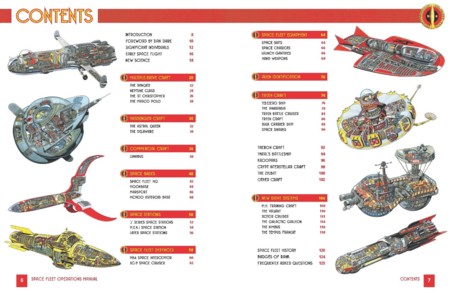 This meant that he could concentrate on Space Fleet’s history and characters leaving me to deal with the artwork and technical bits. His comprehensive knowledge was ideal for me to bounce ideas from, with comments like ‘Space Fleet wouldn’t use that sort of space drive until such and such a date’, etc! We also selected the ships and locations on the basis of how important (Rod in particular) thought they were important to the Dan Dare history. I’m sure a few favourites will have been missed out, but with around 45 cutaways and illustrations in the book (not to mention lots of Eagle frames and other new artwork), I hope most people will be pleased with the results.

DTT: Those Dan Dare craft, along with the majority of the fictional vehicles you have painted cutaways of, were never created to be analysed in the sort of detail your work requires. How much of any given cutaway is 'creative engineering' on your part and do you have any background in the technical drawing of engineering subjects to help you fill in the gaps that the original artist's imagination did not need to show?

Graham: There is a fair bit of ‘creative engineering’ in the Dan Dare book in particular, although as much applies to the Anderson subjects as well (and especially Wallace and Gromit!). For Dan Dare, the main problems are visual inconsistencies between instalments, and often from frame to frame. After all, apart from the Anastasia and a handful of other cutaways, no-one at the time gave too much thought about how the ships worked or whether the details altered from frame to frame. In the 1950s, some effort was made to keep things consistent with the use of studio models and endless photographs, but no-one had time to ensure that fine detail (the detail that I would need years later, anyway!) remained true through all the stories. 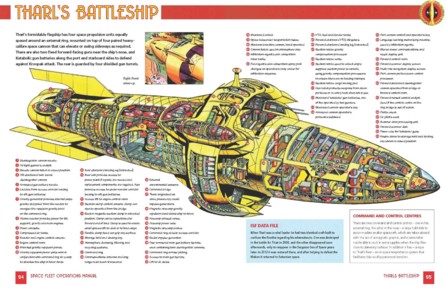 In terms of scientific accuracy, the technology seen in the strip has not been seriously updated, although a couple of aspects such as radiation proofing in spacecraft and spacesuits and polarised heat resistant windows on spacecraft (for example) do get a mention every now and then. I don’t have a scientific background, nor do I have a background in technical drawing either, so it does seem a little odd to many people that the one thing I’m well known for are cutaways of vehicles, locations and spacecraft, both real and imagined!

DTT: The diversity of your cutaway subjects is remarkable, from the Eurofighter Typhoon fighter/bomber for RAF Magazine to Holby City Hospital for the Radio Times, from Thunderbird 2 for Thunderbirds The Comic to the Precinct House space station for Space Precinct magazine, there must be few types of vehicles or constructions that you haven't covered. Which of these has provided you with the greatest challenge to depict and which, of all of them, is your own favourite of your work.

Graham: The cutaway that gave me most problems was one of Wallace’s ‘cracking contraptions’ from the one of the Wallace and Gromit Manuals. It was a device for changing channels on a TV set that involved cogs and catapults in true Wallace tradition (as opposed to a simple remote control). Unfortunately, there was no visual consistency from shot to shot when watching the contraption in action on TV, and the solution I came up with was the only one that Aardman didn’t like. A compromise of sorts was reached, although the result isn’t terribly satisfactory. I guess the makers of said sequence weren’t really expecting some poor sod to try and make sense of it a few years afterwards; the contraption and the short film in which it was featured was created for a laugh, after all. 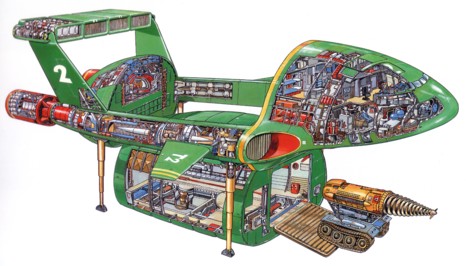 DTT: Thanks for taking the time to talk to us Graham.


There are more details of Graham Bleathman's work on his website.

There are more details of the Dan Dare Spacefleet Operations Manual on the Haynes website.

There are more details of Spaceship Away on the magazine's website and Facebook page.
Posted by Jeremy Briggs at 7:00 am