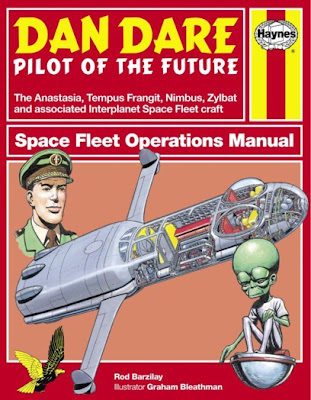 In the 1990s Rod Barzilay had the idea to bring Eagle comic’s best known character, Dan Dare, back into print, not updated for a Star Wars audience as in 2000AD or as a political commentary as in Revolver, but rather as the original character read and loved each week in the 1950s by hundreds of thousands of British schoolboys.

To remain true to the original Rod decided to approach the original 1950s artists to see if they would be willing to return to the comic strip of their youth. Keith Watson and then Don Harley agreed to this and the magazine Spaceship Away was born. 29 issues later, and with many more of the original 1950s and 1960s Dan Dare artists involved along the way, Spaceship Away remains a high quality, full colour, glossy magazine that is published three times a year. So it was no surprise that when Haynes decided to add Dan Dare to their list of science fiction technical manuals that includes Star Wars, Star Trek and Thunderbirds, Rod was the man to write it.

Jeremy Briggs spoke to Rod about this new Dan Dare Spacefleet Operations Manual from Haynes as well as Spaceship Away.

downthetubes: When did you first encounter Dan Dare and what made him standout for you amongst the other strips in Eagle?

Rod Barzilay: I first saw a copy of Eagle in May 1954, at the tender age of seven. I remember green men caught my attention, the Mekon and his Treens in ‘Prisoners of Space’, and although I liked other Eagle strips as well, the idea of outer space adventures appealed the most. 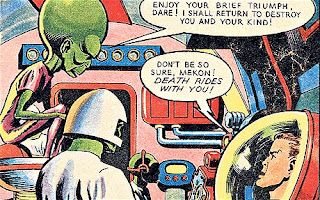 Desmond Walduck was illustrating the strip at this time while the following year Frank Hampson and his team took up the reigns again. To a lad who knew nothing about artists then, the strip just seemed to get better and better until the end of the 1950’s when Dan Dare was updated which was very unsettling to previous readers. Many characters disappeared, equipment and uniforms drastically changed, and continuity with past events was almost totally lost. When the strip went to black and white my interest waned and I stopped taking Eagle at the end of 1963 (mind you I was more interested in girls then!). However, from 1960 onwards I began to chase the early stories I had never seen. It took ten years to fill in all the gaps and when the original Eagle folded in 1969 I also started looking for the later issues to complete the run. It was only then that I saw some of Keith Watson’s later impressive colour Dan Dare work like ‘All Treens Must Die’.

DTT: You began Spaceship Away in 2003 and it is now on its 29th issue. What inspired you start the magazine and how has it changed over the years? 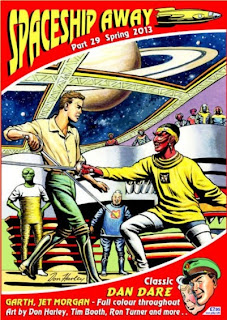 Rod: The magazine was started as a means to get new 1950s style Dan Dare stories in print for the fans who longed for the original Dan Dare to be revived.

Although Dan Dare is the main focus of Spaceship Away, from issue seven we started adding other sci-fi strips as well, including Charles Chilton’s Journey Into Space reprinted from Express Weekly with artwork by Ferdinando Tacconi, and Sydney Jordan’s “Hal Starr” reprinted from the Dutch comic Eppo and its first time being published in English. Later on we added Ron Turner’s “Nick Hazard”, John Freeman and Mike Nicoll’s “Ex Astris” and eventually the Daily Mirror’s “Garth” with art by Frank Bellamy and Martin Asbury.


DTT: Where did the idea for the Haynes Dan Dare manual come from, did you approach them or did they approach you?

Rod: I believe Graham gave Haynes the idea to do a Dan Dare book, along with the suggestion that I could write it. He did bounce the idea off me and I was up for it. As Dan Dare has gone through so many changes over the years we decided to just stick with the original up until the point when Dan was made controller of Space Fleet. This was the period I knew the best and when the strip had the most interesting technology and ideas. The book took about six months to write and I was tweaking stuff right up until it went to the printers at the end of March. Some sections were rewritten when I reread the old stories again and spotted some references that I had miss-remembered, or forgotten about. Also as some information in Eagle had no reference time-line, or was at odds with earlier stuff printed in the strip or elsewhere, this did present some problems, and I had to work it all in somehow. No doubt I’ll get some interesting feedback on my solutions! I would have liked to have expanded some areas of the book had there been more space. Let’s hope nothing important got passed over – no doubt fans will let me know if that is the case! 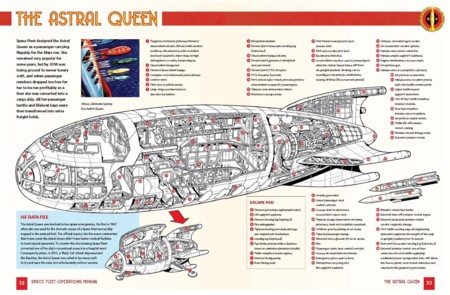 DTT: How did you and Graham decide on what to feature in the manual? For instance how did you choose the Spacefleet theme rather than feature any spaceships that were in the Dan Dare strips?

Rod: The idea was that when Dan became controller of Space Fleet, he commissioned a manual for new recruits. This would not only give an outline of Space Fleet’s history so far, but would also include details of any craft or equipment they could encounter, be it older Space Fleet craft possibly lost in space, or alien ones that had already turned up in the Solar System and might reappear again someday - forewarned is forearmed. We investigate different drive technologies that Space Fleet has tried out, and alien ones it has encountered. There is a good look at lots of Treen spacecraft including the M.E.K.1 space station, and other important alien craft too, like Tharl’s Battleship, Black Cats, the Crypt inter-star ship, and the Zylbat. We also have notes on Theron, Cosmobe, Pescod, Nav, Triton, Pittar, and Krevvid spaceships, plus some unidentified ones that turn up in the saga as well. 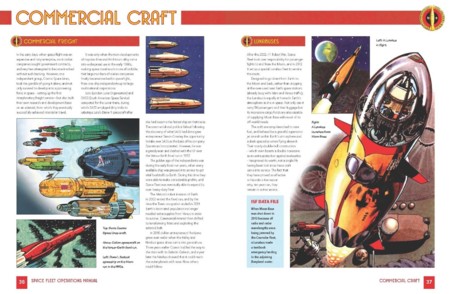 DTT: Artist Graham Bleathman has provided cutaways for Spaceship Away in the past. How much interaction did you have with him over the details of the interiors of the ships and other vehicles featured in the book?

Rod: We both have extensive Eagle collections, which are rich in background details of spaceships and equipment, and did compare notes from time to time, talking over things not fully covered. Two spacecraft, the Marco Polo and the Delaware, were drawn up from my notes and designs in the comic strips in Spaceship Away, but it is Graham’s genius that brings them all to life in such fine cutaway detail. However, Eagle and related publications are a bit thin on the ground with details of Space Fleets early history so I expanded this area taking into account ideas put forward by other fans over the years. 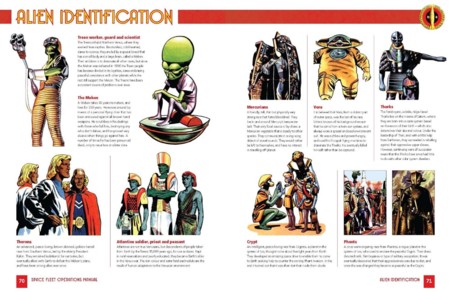 DTT: If the manual is successful enough to warrant a sequel, are there other aspects of the Dan Dare universe that could be featured in a second book?

Rod: Oh yes – we could do a book on all the alien worlds that Dan Dare visited, looking at everything found there, futuristic cities, novel equipment, robots, other spacecraft and strange transport etc – not only in the Solar System, but further afield as well. Venus, Mercury and the Moons of Saturnia are rich in things to have a closer look at, as are planets in other star systems such as Cryptos, Phantos, Terra Nova, Zyl, Platinum Planet, Moss, for example. It would be great fun to do.

DTT: Rod, thanks for taking the time to talk to us.

• There are more details of Graham Bleathman's work on his website.
Posted by Jeremy Briggs at 7:00 am