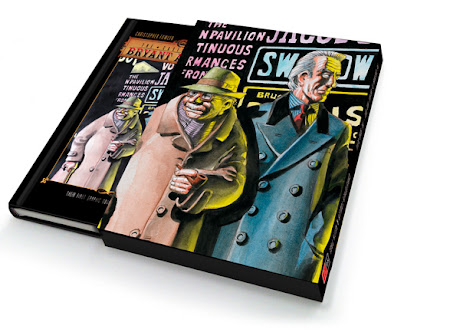 The critically acclaimed cult detectives Bryant & May created by Christopher Fowler are the stars of ten deranged novels that explore London’s most arcane mysteries, from its hidden rivers to its secret societies. And now, thanks to PS Artbooks and artist Keith Page, they’ve come to comics!

Due to be published for January 2013 The Casebook of Bryant & May centres on the little-known Peculiar Crimes Unit, based in London’s King’s Cross, which specialises in dealing with mysteries that Scotland Yard would rather not know about. A deformed creature haunting a West End theatre, a phantom highwayman, mysterious goings-on in the tube network. A London pub which apparently vanishes, an intricate Victorian machine still manipulating the events in the present day...

Things like this need a special type of policing, jobs for John May and Arthur Bryant together with their odd bunch of misfit assistants. The fact that John and Arthur are the oldest detectives still working in London (some say since the 1940’s) only adds to the fun.

"Christopher's characters had always appealed to me," artist Keith Page tells downthetubes. "Although quite a difficult subject, I thought they would lend themselves to a graphic novel if treated in the right manner. Chris had put a few of my drawings of the pair on his entertaining blog and last year he decided that the time was right to have a go at a full graphic novel. Which I jumped at, as you might imagine." 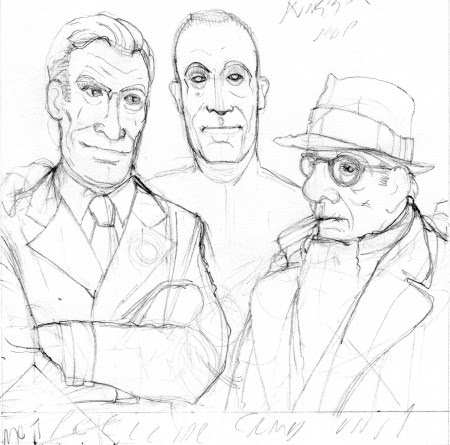 Chris thought that an adaptation of one of the novels wouldn’t be quite the right approach. Instead he came up with a greatly revised treatment of part of one of his earlier books, Soho Black, which had featured John and Arthur in a minor role.

"We also took the opportunity to portray a London which is not quite the present day one," Keith reveals - something he's tackled before in his wonderful Charlotte Corday series published by Timebomb Comics and Print Media Productions.

"There are touches of Ealing comedies and other 1950’s ephemera, although all the settings are real and required either site visits or use of Google Earth Streetview for accuracy," he explains. "The Soho part of the story was already taken care of as I had done a lot of photography for another project. 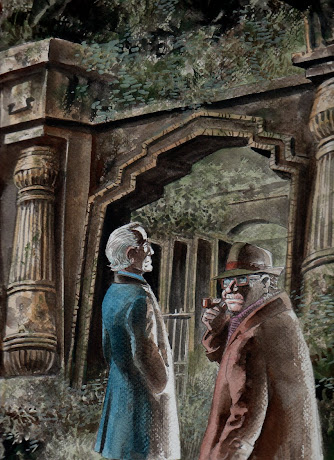 "I decided to use a pencil - and - watercolour technique, similar to that used on Charlotte Corday The Iron Moon graphic album to give a 'different' look. At the same time I had done a few paintings as 'alternative covers' for some of the novels. Chris wanted to include some text and ephemera items and I suggested that the project was now approaching something like a traditional 1960’s type annual. The publisher seemed taken with this idea, so Chris wrote an additional short story to give a total page run of 80 pages. For the second story, featuring a much younger John and Arthur in 1967, I used a 60’s Boy’s World/”Eagle type of technique of hand coloured black linework.

"A fascinating project to work on, quite difficult but fun," says Keith.

Along with this new graphic novel, there's good news for fans of the Bryant and May novels, which having achieved cult status, will continue.

"Bryant & May are set to return in the UK with two new novels, Bryant & May and the Bleeding Heart and Bryant & Man and the Burning Man," says Chris. "So with the US getting back on schedule and the UK too, we’ll all be in synch again (although I have a feeling the UK will continue to publish first).

Along with the graphic novel arriving in January, it looks like a bumper time for the old fellas," he adds. "It’s just a pity TV companies have yet to commit to the series on account of competition from something called New Tricks which I have never watched.

"The new books will, I hope, raise the bar for the matchless duo, and I for one can’t wait to get started."

• The Casebook of Bryant & May - The Soho Devils goes on sale in January from P.S. Artbooks. More info: http://psartbooks.com/catalog/bryant-may-the-soho-devil.html. Limited to just 2000 copies and split across two editions, this book is available to order through either psartbooks.com or pspublishing.co.uk.

• Keith Page's blog is at: http://keithpageukcomicsartist.blogspot.co.uk

• Christopher Fowler's blog is at: www.christopherfowler.co.uk/blog/