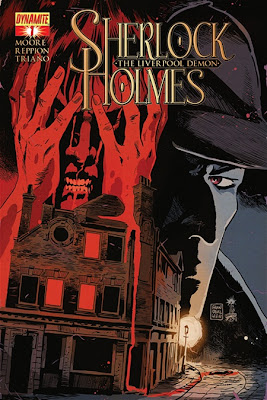 Sherlock Holmes: The Liverpool Demon #1, written by British creators Leah Moore and John Reppion and penciled by Matt Triano is on sale now in all good comic shops.

Sherlock Holmes is busy doing what he does best, solving a case of far-reaching international notoriety. It has landed him at the Port of Liverpool, a bustling hub of commerce both legitimate and illicit. As that chapter closes, ours begins. They head to Lime Street Station, to catch a fast steam locomotive home to London and Baker Street, when violent weather keeps The Great Detective and Watson in Britain's second city a while longer. Long enough to encounter a monster, discover the Liverpool underworld, and to become embroiled in one of his strangest cases yet.

“Arthur Doyle may be dead, but reading Leah Moore and John Reppion’s depiction of his immortal hero, Sherlock Holmes, will make you believe in his soul with us forever," Spider-Man writer Marc Guggenheim  commented. "One of the best revitalizations of a character I have ever read.”

• There's more about the Liverpool Demon on Leah Moore and John Reppion's web site. A collected edition of The Trial of Sherlock Holmes is available.

• To read a little more about Matt, go to: http://witterstaetterwrites.blogspot.com/2012/01/spotlight-new-interviw-with-matt-triano.html
Posted by John Freeman at 8:00 pm