Dundee's plan for real Bash Street to go ahead 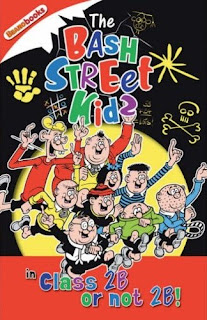 The city council has approved the plans proposed by The Beano publisher DC Thomson to honour The Bash Street Kids which were being considered for a location the city's west end, which Jeremy Briggs reported here early last month.

First appearing in The Beano under its original title of When The Bell Rings in the issue dated 13 February 1954, editor George Moonie was inspired by the antics of the children of the High School Of Dundee, the playground of which could be seen from the windows of the Beano office, and he passed the idea to artist Leo Baxendale whose imagination did the rest.

Major redevelopment work in the city prompted a proposal to name a new street Bash Street and a soft play area for children that will utilise Beano characters under license from DC Thomson, in part to celebrate the 75th anniversary of the comic in 2013.

The Bash Street Kids will feature heavily in the new centre alongside Dennis the Menace, Gnasher, Minnie the Minx, Roger the Dodger and The Beano logo. Dundee City Council has now approved a request from DCThomson to allocate the name Bash Street to the street adjacent to 142/144 WestMarketgait which currently has no name.

The street is beside a Travelodge hotel off West Marketgait and between the West Port Roundabout and Guthrie Street where DC Thomson used to have their printing works - and only a short walk from DC Thomson's Courier Building and the High School Of Dundee itself.

• There are more details of the High School Of Dundee's connection with The Bash Street Kids over on Bear Alley.