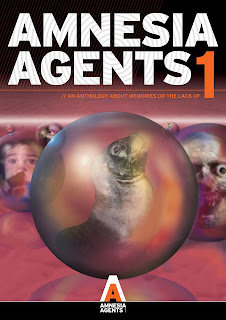 "Have you ever wondered what happens to the things - or the people - you forget?

There is a place where these things end up, a place just beyond what we can normally see and hear... or remember. There are dark forces at work at the edge of remembering.
This is where The Amnesia Agents come in..."

"It's been great fun putting this together, my first foray back into small press for some years, "says Jason. "One of the things I wanted to ensure was that this could still be an all-ages comic. I've never been a big fan of gore and swearing for the sake of it in comics, so although this features our friend Hugo the zombie and some scary themes, it doesn't get that 'for mature readers only' tag. I'd like to say a public thank you to all those talented people who contributed artwork and/or scripts to this project at relatively short notice."


There are more details of Amnesia Agents, and the rest of Jason Cobley's work, on his Writing Coblers blog.
Posted by Jeremy Briggs at 7:00 am