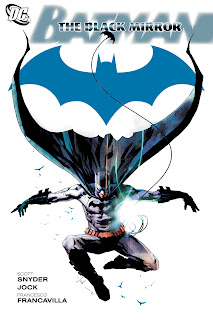 In the first of a series of shows about comic book creators who collaborate together, Alex Fitch of radio show Panel Borders talks to writer Scott Snyder and artist Jock about their 2010 / 2011 collaboration on Detective Comics, collected as the graphic novel Batman: The Black Mirror.

Although Snyder’s current run on Batman is also winning critical acclaim, his first story showed his great affinity with the Dark Knight right from the start; The Black Mirror, also featured back-up tales illustrated by Francesco Francavella, which combine with the ‘features’ by Jock to tell a memorable tale of Jim Gordon’s estranged son James Junior returning home with murderous intent, while a former Robin, Dick Grayson, is protecting Gotham City as the Caped Crusader .

Recorded at Kapow! comics convention, London 2012 and broadcast 1st July 2012 on Resonance 104.4 FM, you can listen to the show over on Panel Borders now.

• The next new episode of Panel Borders will be broadcast / podcast on Sunday 15th July 2012.