No Heroes But One Award! 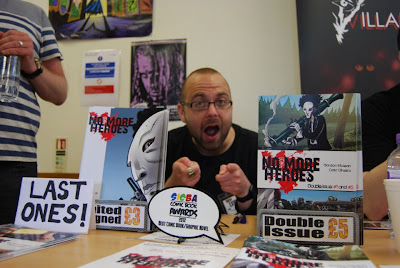 The “little comic that could” No More Heroes picked up the award for Best Comic at the SICBA (Scottish Independent Comic Book Awards) event held at Glasgow Comic Con over the weekend.

The four-issue mini-series about the suspicious death of the world’s greatest superhero and his sidekick’s search for the truth has picked up a lot of attention since its March debut thanks to its unusual origins. When its writer Gordon Mclean lost his job he used his redundancy money to fund the comic and teamed up with artist Caio Oliveira to make his dream of being a comic creator a reality.

“Winning this award is an incredible honour and a hell of a way to top off what’s already been a shockingly successful few months for our comic," says Gordon. "We’ve sold a hefty amount of copies of what’s basically a debut comic by an unknown creative team and of course there was the bizarre situation of seeing issue one becoming the most pirated comic in the British indie scene and sitting in the torrent charts next to Batman and The Walking Dead. Sod it, I’m putting that in the win column too!”

Gordon and Caio are now planning on using their success to find a publisher for No More Heroes and take their comic to a wider audience.

“If ever there was a time to get a publisher to pick up our comic it’s now," Gordon enthuses. "We’re award-winning, the response from readers and critics has been incredibly positive and we’ve received a lot of attention from comic book websites, magazines, blogs, podcasts etc.

"A special thank you to Rich Johnston at Bleeding Cool – he’s been a hell of a supporter of No More Heroes and by featuring it on his website he raised its profile immensely.

“I’ve also adapted the title into a film script that’s picked up some studio attention," Gordon reveals. "If all of this this isn’t enough to convince a publisher that this is a hit comic waiting to happen then I don’t know what is!”

• Anyone interested in No More Heroes should its official website at nomoreheroescomic.wordpress.com
Posted by John Freeman at 1:27 pm