The comics-inspired feature film Electric Man has been selected to screen at the San Diego Comic Con (full details here) and screens in London tomorrow night.

The movie was selected as only one of three feature films to play this year's San Diego event from over 200 initial entries and is a major boost to a small Edinburgh-based indie film company.

Toby Manley, Mark McKirdy and Fish, it's been described as "The Maltese Falcon meets The IT Crowd", a diverting mixture of romantic comedy and hectic chase thriller from co-writer/director David Barras. 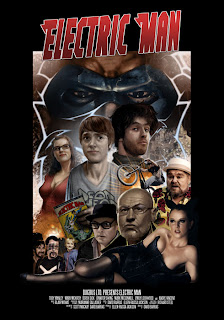 Buddies Jazz and Wolf are the impoverished owners of Deadhead Comics and need £5,000 to save the business. When a mint condition copy of Electric Man issue 1 from 1937 turns up in their shop they think it's the answer to their prayers. But the coveted comic is hotly pursued by an American collector, the sinister Jimmy and a femme fatale by the name of Lauren McCall.

The dry wit of the screenplay and bantering relationship between the central duo are the star attractions in this impressive micro-budget production.

Reaction to Electric Man has been hugely positive, and it was BAFTA nominated in the script and score categories in the New Talent Awards and shortlisted as Best Feature Length drama at this year's Celtic Media Festival.

"An amusing hybrid of romantic comedy and hectic chase thriller” says Allan Hunter from Screen International of the film, while comic artist Frank Quitely calls it “A wonderfully twisty-turny comic caper, made and played with warmth, wit and genuine affection.”

"Shot in 19 days on a budget of £55,000, Electric Man is a good deal more polished and
confident than many recent micro-budget, independent Scottish efforts," notes Screen Daily. "... The dry wit of the screenplay and engaging performances help to carry the day. Attractive Edinburgh locations add to the appeal and the film should merit a realistic theatrical release."

"This isn’t simply a comics movie, it’s a terrific Indy movie set in Edinburgh that
anyone can enjoy," feels Joe Gordon over at the Forbidden Planet International blog. "... I really think you’re all going to enjoy..."

UK fans will get the chance to see the film this Sunday (8th July) at the Prince Charles Cinema in London, full details here. The production team are also running competitions for free tickets on twitter and Facebook - check out @electricmanfilm and http://facebook.com/pages/Electric-Man