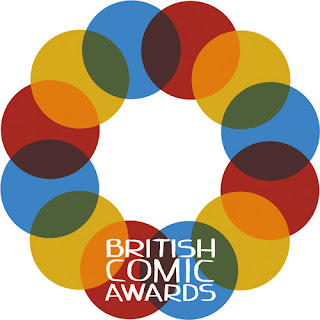 News today (via The Emperor and the Forbidden Planet Blog) of the launch of the British Comic Awards website.

The British Comic Awards is described as a brand new initiative to annually celebrate the very best in British comics. The organisers aim to commend and highlight the best stories told by writers and illustrators over the past twelve months.

"Our awards recognise the finest examples of creativity, ingenuity, skill and originality in sequential storytelling in all genres and formats. We don’t distinguish between printed work and digital, or between published and self-published work; our only criteria is that the creator(s) be from the UK.

"The Awards are designed to focus on the work itself and the wonderful stories being told by the wealth of talent in this country."

There are only five awards which will emphasise the high quality of all the nominated books, not just the winners and these are:

• Emerging Talent to recognise irrepressible talent and potential in a young or new creator.

• Hall of Fame to commemorate the career and legacy of an influential figure from Britain’s rich comic history.

More details about each category can be found on the site's Awards page.
Posted by John Freeman at 1:15 pm