In Review: The League of Extraordinary Gentlemen – Century: 2009 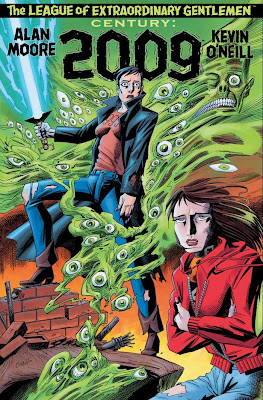 The Book: The third chapter of the third volume of The League of Extraordinary Gentlemen continues the adventures of the three surviving members of the League – Allan Quartermain, Wilhelmina Murray and Orlando – from the preceding instalments.

As the story begins, in the titular year of 2009, Orlando is the last survivor of a massacre he is responsible for in the fictional Middle Eastern locale of Q'Mar and about to be given a medal as a war hero. The character returns to the underground base as seen in Century: 1969, and while beginning one of his regular transformations into a woman, Orlando is visited by Prospero from the Blazing World and instructed to reform the league and find the missing Quartermain and Murray before the apocalypse they've been trying to avert all century comes to pass.

To aid Orlando on this mission, she contacts a character previously seen in The League of Extraordinary Gentlemen – Black Dossier for help and begins a quest to stop the now adult moon-child / Antichrist, which series antagonist Oliver Haddo has managed to create, from destroying the world. 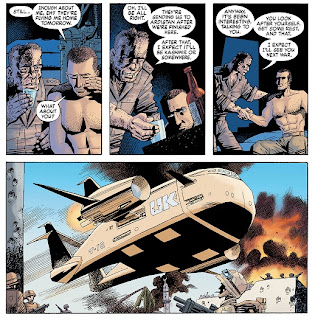 The Review: An epic finale to volume III of the increasingly inaccurately titled League of Extraordinary Gentlemen – although a league is equivalent to three miles, common parlance would suggest it should be a team of more than three members, and volume IV looks likely to feature a league where the women outnumber the men – which sees the plot strands of the previous two instalments, as well as many elements from Black Dossier wrapped up before setting up the future of the team.

The comic displays the creative team's exemplary talent in creating a gripping, thought-provoking and entertaining title as much as ever, however while the story does provide an appealing conclusion to volume III of the franchise, 2009 is less satisfying than its predecessors in using the recent cultural landscape to provide a fictional universe.

The previous instalments of Century used iconic pieces of fiction and fact to weave compelling backdrops to each issue's story. 1910 combined The Threepenny Opera by Bertolt Brecht and Kurt Weill with Moonchild by Aleister Crowley, mixing in the actual events of the year such as the coronation of George V and the appearance of Halley's Comet, while 1969 combined elements of Rosemary's Baby by Ira Levin, Performance by Donald Cammell and Nicolas Roeg and Get Carter by Mike Hodges and Ted Lewis with the backdrop of events happening in 1969 in the lives of The Rolling Stones such as the death of Brian Jones and the band's performances in Hyde Park and Altamont.


In comparison, 2009 sees Moore and O'Neill mainly use only one popular fantasy franchise as fictional inspiration and little – beyond the opening scene in the Middle East – from the real 2009, which saw such events as increased militaristic posturing by North Korea, the second activation of the Large Hadron Collider and the death of Michael Jackson, which could have informed the plot. Vaguely hysterical newspaper headlines from around the time of the release of the comic on June 18th 2012 will probably have spoiled the identity of the Antichrist in 2009 for many people, but this was signposted in the previous instalment when Tom (whose “middle name is a Marvel” and “last name's a Conundrum”), a teacher of “occult studies at a school up North” absorbs an evil spirit and disappears through a wall next to Platform 10 at King's Cross station.

Certainly, the fictional franchise this character is the main antagonist from, is one that has been incredibly successful in both print and film formats, so you can see why it would be tempting for Moore to co-opt some of the characters and situations, particularly as the film adaptations have been a major cash cow for Time Warner, owners of previous League (and Watchmen) publishers DC Comics. However, the fictional landscape in recent years has been richer than that, regardless of Moore's protestations on the subject, so there could have also been references to the work of Terry Pratchett, Neil Gaiman and even the author's own work (beyond a character transforming from a 'real' person into a drawing, as previously seen in his Neonomicon). In the League's timeline, fantastical creatures were banished from the Earth in the 17th century, but the massive re-emergence of fantasy as a genre due to the work of Pratchett, Gaiman and J.K. Rowling should have seen more fantasy in the fictional mash-up of the year being presented to us, which the League has always typified in the past. 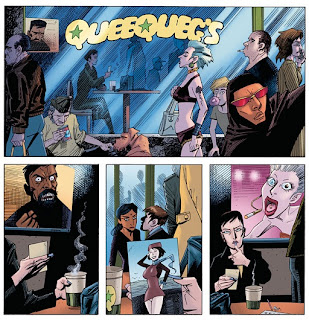 Specific fictional events in previous instalments have come from fictions written both before and after the years each issue has been set in – for example the events in a fictional 1910 (or thereabouts) as later conceived of by Brecht and Crowley – and there have been a handful of apocalypse fictions set in 2009, such as the backstory of the films I am Legend and Roland Emmerich's 2012, not to mention alien incursions witnessed by the media in Cloverfield, Doctor Who and Torchwood – the latter two being referenced anyway via pictorial cameos by a couple of Doctors and Captain Jack Harkness. Instead, the rest of the fictional landscape of 2009 is used to cameo various British comedies from The Thick of it to The Fast Show and fifty years of James Bond on screen. One could argue the dismal world presented in Century: 2009 is due to much of our recent fiction being overshadowed by the rise of 'reality television', but if I could find half a dozen SF antecedents for a fictional 2009 by spending five minutes on wikipedia, it seems odd that Alan Moore hasn't provided his 2009 with a richer fictional backdrop.

The previous two instalments of The League of Extraordinary Gentlemen – Century, not to mention Black Dossier, which is also a must read to recognise a handful of returning characters and situations in Century, were more ambitious and challenging than the original two volumes published by DC. Criticisms levelled at 1910 and 1969 have been mainly due to too many obscure references and the odd habit of characters breaking into song, and neither criticism is that valid, looking at Moore's work as a whole. With 2009 both the obscure references and the singing are kept to a minimum and ironically the issue is less satisfying, as it sacrifices some of its meta-textuality for a simpler narrative than its predecessors.


However, while the main plot may be a little over-familiar and derivative – which is at least suitable, considering the franchise Moore is riffing on – the excellence of the characterisation both in terms of script and Kevin O'Neill's sensitive handling of the characters is as great as ever. The continuing theme of immortals dealing with the emotional and intellectual problems of their continued existence becomes increasingly paramount in this instalment (references to baryonic matter and immortality via Century's back-up text story 'Minions of the Moon', suggest an influence by Stephen Baxter, a writer who's also a fan of and sequel writer to the works of H.G. Wells and Arthur C. Clarke) and I sincerely look forward to the continuation of this narrative in volume IV and the proposed shorter issues set in between the instalments we have already.
Posted by Alex at 2:27 pm