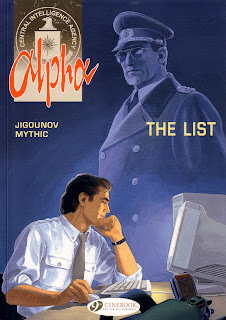 Cinebook publish a number of spy or spy-like series including IR$, Lady S and Largo Winch, but the only CIA agent on (or rather in) their books is Alpha. The List was originally published by Le Lombard in 1999 as La Liste, the 4th Alpha album.

Written by Mythic (Jean-Claude Smit-le-Bénédicte) and illustrated by Youri Jigounov, Alpha has now reached 11 French albums (with the title of the 11th no doubt going to be a problem for Cinebook when they reach it) and there is a certain delicious irony that a series about an American CIA spy is actually illustrated by a Russian who was born in Moscow during the Cold War. 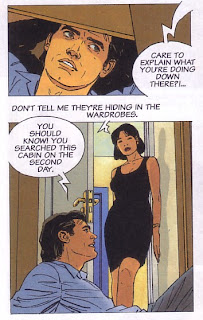 On the night of 10 November 1989, on the other side of the Berlin Wall, Colonel Wolfgang Wagemuller of the Stasi, the East German secret police, realises that the old order is about to collapse and returns to his office where he removes computer files containing a list of the names of American businessmen who collaborated with the Communist authorities for profit.

Years later, with a wife and a young daughter and while working at a stuffed toy factory, Wagemuller believes that he has been recognised and contacts the Americans to give him and his family a new life in the US in exchange for the computer list. Alpha and his colleagues are tasked to get Wagemuller and his family to safety in the US while being pursued by a number of other groups who want the same list, including the Israeli Mossad and agents working for a US arms manufacturer named on the list. 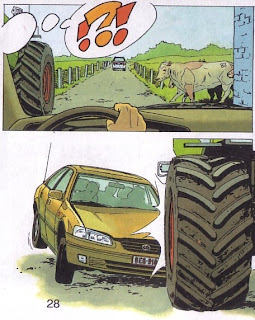 There is no great depth to Mythic's plot of The List as it is an unashamed chase story. He takes his characters from the canals of Amsterdam via various car chases through country roads, to the port of Le Harve and then onto a cruise liner bound for New York. The pace never stops until all the various agents are on the cruise ship with suddenly nothing to do other than relax for the duration of the voyage. Of course being trained agents they never really let their guard down which ultimately proves necessary as events on the cruiser liner unfold.

Jigounov's clear artwork stands up to the test of having a very large cast of characters to illustrate while his accuracy on all the numerous vehicles used during the car chases is so impressive that virtually every car in the book is identifiable by its make and model.

Alpha - The List is not the book for you if you are looking for a deep and thoughtful story, but if you are after a fast moving action filled adventure then this is going to be hard to beat.

• There are more details of the English language Alpha books at the Cinebook website.

• There are more details of the French language Alpha books at Le Lombard website.
Posted by Jeremy Briggs at 7:00 am