Tube Surfing: Behind the Scenes, Adults Only and Travelling in Japan 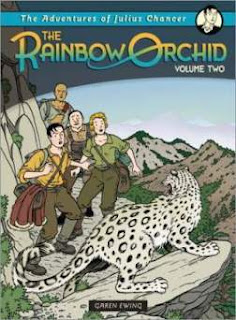 Fans of The Rainbow Orchid by Garen Ewing can get a peek behind the scenes of that comic over at the Forbidden Planet International blog as the cartoonist takes us through his page creation process:

"Writing it out in order like this might make it all seem very organised," he notes, "and it is to a certain extent, but the reality means that it often develops out of order and in bits and pieces here and there."

There's also a chance to go behind the scenes with another comic artist, Oliver Frey, in this interview conducted by Paul Gravett (warning: the piece contains content that means it is stritly for adults only):

"No matter what fantasy figures he is illustrating, whether it’s the dazzling science fiction heroes in Dan Dare, The Trigan Empire or The Terminal Man or the homoerotic hunks Rogue, Bike Boy and others from HIM and Meatmen," writes Gravett in his introduction to the interview.

Neill Cameron has recently posted his Japan Manga Diary strip over at his blog. It was first published in Neo magazine in 2006 and is definitely worth a read.

Neill also informs us that he has updated the online shop at his website, which is now selling his various small press comics, including the fantastic Bulldog Empire (written by Jason Cobley).

And finally (told you it was a short one), Joel Meadows, better known as the man behind comics magazine Tripwire now has a website devoted to his photography.
Posted by Matt Badham at 10:09 am

Great to see the Oliver Frey interview. Oliver was someone I was keen to interview for my Eagle fanzine 'Eagle Flies Again' but I wasn't sure how to get hold of him. His Dan Dare work has been overlooked to a degree - partly because of the shadow cast by those two Dan Dare giants Gerry Emblton and Ian Kennedy - but Oliver's work was superb too. He initially stood in for a couple of weeks when Gerry left and before Ian started - a bit like being George Lazenby between Sean Connery and Roger Moore! - but he came back later on a slightly more permanent basis and produced some stunning work. Oliver, you produced many happy memories for Eagle readers.