Classic British strip Wulf The Briton to be collected 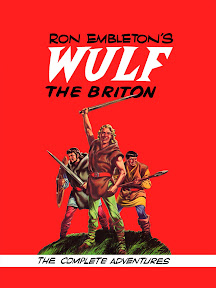 There's some great news for fans of cracking British comics artist Ron Embleton with the announcement of an impending collection of his superb comicstrip, Wulf the Briton, from Book Palace Books - fronted by an introduction from Dave Gibbons.

Longtime fan of the strip Peter Richardson is the brains behind this exciting project, a collection of strips first published in Express Weekly.

Set largely in Roman Britain, the comic ran for three years before Express (latterly TV Express) Weekly and is considered one of the UK's finest 'classic' comic strips.

Embleton took over the strip in 1959, and the workload he was shouldered with on Wulf was formidable. In comparison to Frank Hampson, who had a studio and assistants to help meet the weekly Dan Dare deadlines, Embleton just had himself to draw, letter and paint the feature.

Embleton was, however, unfazed by such considerations and within a few months he was also writing the strip and steering it in a much more historically credible direction as well as adding an extra page to the strip.

"As a result of my weekly blog postings [about Wulf] earlier in the year I had an approach from Geoff West CEO of Book Palace Books to enquire whether I would be interested in editing a collection of all Ron Embleton's Wulf the Briton stories," Peter reveals on the Cloud 109 blog. "As this was the comic above all others that totally captured my imagination as a child and as no one has ever attempted to do this before, I jumped at the chance.

"The intervening months have been a whirlwind of Wulf activity, involving meetings with the people at Express Newspapers, talking to people who were close to Ron, seeking out material which would help shed light on the creation of this epic strip and uncovering hitherto unseen by all but a few, original Wulf boards." 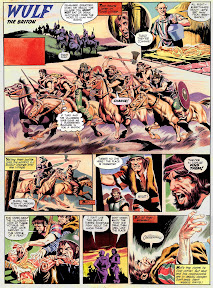 Carefully restored, the collection, which will be introduced by top artist Dave Gibbons, who describes the upcoming book as "a classic UK comic art must-have", will run to 300 plus pages of art, plus all the annuals, plus any other piece of Wulf artwork generated by Ron.

"It really is a gargantuan project," says Peter.

The collected Wulf the Briton will come in two different editions: a regular edition and a very limited leather bound and slip cased edition of just 100 copies. "The slipcased edition will feature some absolutely stonking pages shot from the original artwork, much of it only recently unearthed and not having done the rounds of the collector' s circuit and in absolutely pristine condition.

"The pages will be printed at the same size the comic was published so there has been very careful work done to ensure that there is no loss of Embleton's brushwork, we want owning this book to be as pleasurable as having an entire run of the original comics but with the added convenience of being all bound together in a durable format."

"Wulf the Briton was without doubt Ron Embleton's comic masterpiece," feels Peter, talking about the strip earlier in the year. "He took over the strip - a single page cover feature on Express Weekly in 1957. As a result of Embleton's artistic input it went from being an OK'ish main feature to at least, aesthetically speaking, a rival to Frank Hampson's Dan Dare."

It's clear that Peter and everyone involved have put a lot of hours into getting this project right (and more hours to come), delivering the material in the kind of format that fans of such British classic comics material crave. We eagerly await news on a publication date.

• David has posted some 'teaser images' of the project over on his Cloud 109 blog
Posted by John Freeman at 9:08 am