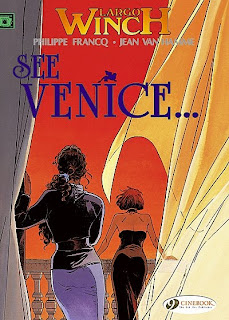 Largo Winch is the Eagle Award nominated series that follows the life, loves and tribulations of one of the richest men in the world. Written by Lady S, Thorgal and XIII's Jean Van Hamme and illustrated by Philippe Francq, the series has reached 16 albums in French of which 10 have now been translated by Cinebook into English.

Largo is the adopted son of the billionaire owner of the W organisation which he inherited on his father's death. In Paris Largo meets up with Charity, an old girlfriend from his previous life, who he cannot persuade to return to New York with him. Instead she goes to Venice to meet her former lover Domenica who has just had a run in with Italian terrorists attempting to escape the police after assassinating a local banker. When the terrorists return and kidnap Charity, Largo and Domenica team up to attempt to retrieve her which leads them to the Masked Ball of the Doge of Venice, a man that Largo has already been warned about.

The character began in a series of text novels by Van Hamme in the 1970s which then became a series of graphic novels beginning with L'Héritier in 1990. It is a popular series in the French speaking world with both a live action television series based on the character and, more recently, a film which is due for UK DVD release in August. 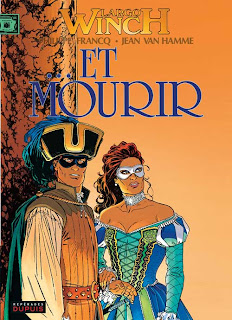 Each Largo Winch story is split over two French language albums which Cinebook have always paired into double thickness English language books, so their decision to standardise all their publications as one French album to one English book perhaps affects Largo Winch more than the rest of their ongoing titles. See Venice... was originally published by Dupuis as Voir Venise... in 1998 while ...And Die was published as ...Et Mourir in 1999 and, while it has a one page recap, you cannot really read and make sense of ...And Die without having read See Venice... first.

That said the double length page count allows Van Hamme space to develop his characters and plots in the 92 pages that each story provides. As for the title character, it may be easiest to think of Largo Winch as a rich James Bond whose wealth allows him to operate outside of any government control but whose sense of morality keeps any excesses in check. In these books we see him fly between Paris, New York and Venice, dealing with terrorist kidnapping, a former girlfriend who is less than enamoured with his wealth and, while it doesn't appear that way in the first book, a considerable amount of corporate intrigue. 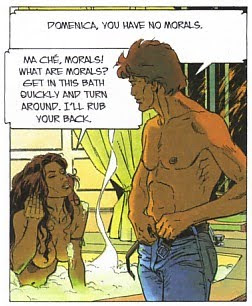 Personally I find that the books can be a little far fetched at times, with Largo's Bond-like ability to be surrounded by beautiful women somewhat trying, which perhaps is why I prefer the same writer's Lady S. That said the Largo Winch books are never disappointing with Francq's artwork always impressive and accessible. His women are indeed beautiful and his ability to draw detailed backgrounds is shown off well in these two books, with impressive views of Parisian and Venetian architecture and landscapes as the story progresses in addition to the more usual American skyscrapers.

Jean Van Hamme is a master when it comes to writing contemporary thrillers and the pairing of See Venice... And Die retains the reader's interest in both his ongoing and new characters while showing off his twisty but fast paced plotting to good effect.

There are more details of the English language Largo Winch books at the Cinebook website.

There are more details about the Largo Winch series at the official website (in English).
Posted by Jeremy Briggs at 7:00 am