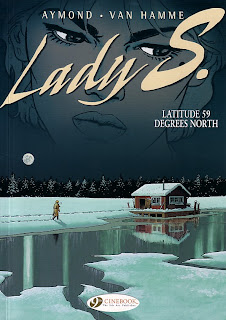 Born as Shania in Estonia, now a naturalised American as Suzan, while blackmailed into espionage activities as Lady S, the leading lady of writer Jean Van Hamme and artist Philippe Aymond's Lady S series has such a complicated back story that it took two full French albums to tell it. Fortunately when Cinebook translated them into English, the company published them as one book, Here's To Suzie! Despite the complexity of what has gone before Van Hamme provides everything that the new reader would need to know in a scene setting single page catch-up before launching into the main story of Latitude 59 Degrees North. 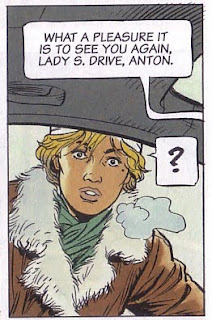 Suzan is in the Swedish capital of Stockholm, which is located 59 degrees north of the equator, with her diplomat father who is due to be attending the annual Nobel Prizes presentation, a night when when the eyes of the world turn to Sweden. Whilst enjoying the attentions of a Russian journalist, Suzan is told by her spy handler that she must acquire documents from the hotel room of a Pakistani businessman who is already under surveillance. The documents give the details of a plot to kidnap and hold the Nobel laureates for a ransom. However it all seems a little too easy and the authorities become suspicious that they may have been feed a red herring somewhere along the line. 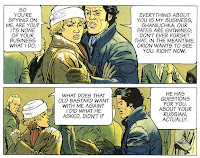 Van Hamme's plotting takes the reader through several loops in the story that all tie up neatly in the end while Aymond's detailed artwork sets off the Swedish scenes, be they the historic buildings of Stockholm or the frozen shack on the front cover. The story intertwines the Americans, the Swedes, the Russian journalist and the Pakistani businessman into an tale of international intrigue and apparently political kidnapping. It even offers a little more detail on Suzan's handler Orion who, while effectively blackmailing her into working for him, is actually on the side of law and order. It is perhaps as close to a modern day Modesty Blaise as you can get.

I described the previous Lady S book as "simply one of the best bandes dessinees that I have read" so I approached this one with a little trepidation, wondering if it could stand up to my anticipation of it. I'm very glad to say that Latitude 59 Degrees North is an excellent continuation of the life of the woman who prefers to be known as Suzan Fitzroy.

• There are more details of the British Lady S books on the Cinebook website.

• There are more details of the six French Lady S books on the Dupuis website (in French).

• Jean Van Hamme, the writer of Lady S and many other bandes dessinees such as Largo Winch, Thorgal and XIII, will be in London on 5 May 2010. He will be signed copies of his books at the French Bookshop, 28 Bute Street, South Kensington (close to the South Kensington underground station) beginning at 5:30 pm. This will be followed by a question and answer session plus a screening of the Largo Winch film at the Institut Francais Cine Lumiere at 17 Queensberry Place, South Kensington beginning at 8:30 pm. The evening concludes with a launch party for Cinebook's XIII series at London's Movida club.
Posted by Jeremy Briggs at 7:00 am