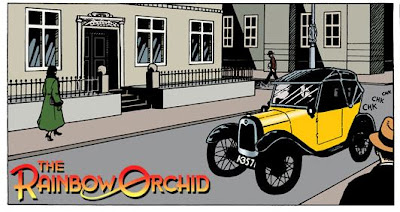 Egmont UK is to publish The Rainbow Orchid, first published independently by writer-artist Garen Ewing (inteeviewed by downtheubes in 2006). The Rainbow Orchid story, to be published in 2009, will join the Tintin series on Egmont's publishing list and is the latest in a number of recent acquisitions by Egmont UK as it grows its share of the children's book market in the UK.

The Rainbow Orchid is an adventure story in the "Ligne Claire" style, the term given to the drawing style developed by Hergé and others in the 1970's and the series earlier stories have attracted huge critical acclaim on both sides of the English Channel.

Set in the 1920s, The Rainbow Orchid tells of the search for a mythical flower last mentioned by the ancient Greek philosopher and botanist, Theophrastus. The story's hero, Julius Chancer, is a determined adventurer who travels to the forgotten valleys of India to find the orchid while the villainous Urkaz Grope does everything in his power to stop him. The story will be available in three volumes, with book one publishing in 2009.

The story has been in existence as a number of short series and an online comic for some time and was nominated for two National Comic awards at the Bristol Comics Festival. The series already enjoys a varied international readership online.

"The Rainbow Orchid is traditional adventure at its best," says David Riley for Egmont publishing, "and a fantastically modern creation. The concept and design have real stand-out quality and the series will appeal to fans of comics, design, illustration, or those who just love a good adventure! The market has never been more right for a series like this."

Author and illustrator Garen Ewing has been writing and drawing comics since childhood. In 2002, work on The Rainbow Orchid began in earnest and the series was soon picked for representation by Blake Friedmann.

"From the outset, Garen and I were extremely impressed by Egmont's passion and vision for The Rainbow Orchid," says Oliver Munson at Blake Friedmann. "When you look at the enormous success they've had over the years with household names such as Tintin, we really could not have found a better home for young Mr. Chancer."

Garen is currently working on a new strip for The DFC, a new subscription-only comic due for release in May (see news story).