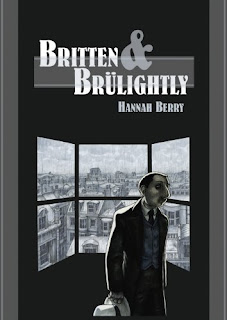 This dark, unsettling but often funny tale centres on ‘Private Researcher’ Fernández Britten, often a messenger for bad news who would view being shot as a blessing. The years spent uncovering people’s secret dramas and helping to confirm their darkest suspicions have eventually taken their toll. Battered by remorse over the lives he has ruined, he clings to the hope of redemption through delivering, just once, a truth with a positive impact. It’s a hope he has been clinging to for a long time.

And so Britten and his 'unconventional' partner, Brülightly (a tea bag!), take on the case of Berni Kudos’ suicide... at least, suicide was the official verdict. His fiancée, Charlotte Maughton, believes his death was something more sinister. Accompany them on this troublesome quest through rain-soaked streets, looming mansions, and dripping woodland, in search of the truth at the heart of this dysfunctional family drama.

Blackmail, revenge, murder are part and parcel of this great book. It's beautifully drawn, and proves an unconventional whodunnit in every sense of the word, with a both caustic and at times macabre script, and a great graphic novel debut by Hannah Barry. Storytelling throughout is strong and certain characters positively leap off the page for sheer nastiness, including a certain waiter and the miserable Britten himself.

For all the quality of both art and script, I have to say I was deeply unimpressed by the book's lettering. Given the costs involved in the production of such a book, whoever decided to allow such a scratchy, occasionally near illegible finish, made a poor decision. Lettering should never jar the reader of a graphic novel which, sadly, this does on almost every page.

That said, Britten & Brülightly is still a great read and worth tracking down in your local bookshop, especially if you are a fan of deteive novels or film noir.

• Read an article by Hannah Berry about writing the novel on Dazed Digital
Posted by John Freeman at 11:21 am