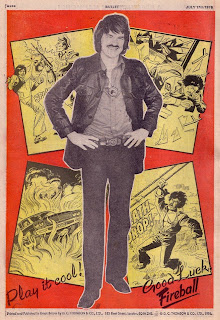 BUT... ONLY TOUGH JOBS ACCEPTED.
Do you recognise this man?
As the agent/adventurer from D C Thomson’s mid-1970s Bullet comic, Fireball was the comic’s major character and was represented in Bullet’s editorial pages, and the odd pin-up, in photographs.
IPC's equivalent of Bullet was Action! which also had a photographic editor -- writer Steve Moore. But who donned the medallion and leather jacket to become Fireball?

Warlord and Starblazer editor Bill Graham knows and tells downthetubes in a wide ranging interview covering his long career at D C Thomson and the many and varied titles he has worked on, also revealing some perhaps previously unknown history to the Dandy.
• Read the interview with Bill Graham on the main site here.
Posted by Jeremy Briggs at 5:00 pm