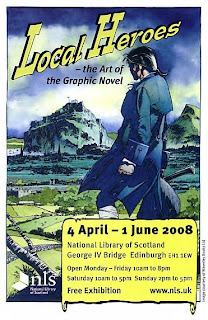 As the National Library of Scotland's graphic novel exhibition Local Heroes approaches, the Library have announced a program of talks in conjuction with the Edinburgh exhibition.

On Wednesday 9 April at 7pm Alan Grant and Cam Kennedy will return to the library for another discussion on their work which includes the recently released Strange Case Of Dr Jekyll and Mr Hyde, while on Tuesday 15 April at 1pm Dr Mel Gibson will give her talk on Getting To Grips With Graphic Novels, Comics and Manga.

On Wednesday 23 April at 7pm Sandra Marrs and John Chalmers of Metaphrog will be discussing their range of Louis graphic novels, and this will be followed on Friday 25 April at 2pm when Exhibition curator John Birch will give a guided tour of the exhibition.

The range of events concludes on Tuesday 29 April at 7pm when DC Comics artist Vincent Deighan, better known as Frank Quitely, will talk about his work From Electric Soup To Superman.

All events are free but ticketed and there are more details on the events and how to obtain tickets at the NLS exhibitions page.

The Local Heroes exhibition in the National Library of Scotland on Edinburgh's George IV bridge opens on Friday 4 April and runs through to Sunday 1 June. It is open seven days a week including some late nights and is also free. Opening time details are available from the NLS exhibitions page.
Posted by Jeremy Briggs at 12:47 pm