Spaceship Away 28 Available In Time For Christmas 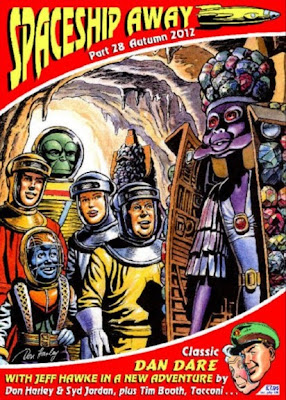 Spaceship Away, the A4, full colour glossy magazine that covers original Dan Dare as well as a selection of other classic strips, has released issue 28 in time for Christmas.

Priced at £7.95, including UK postage, the 44 page issue features a new Marooned on Mercury cover from original 1950s Dan Dare artist Don Harley as well as a special one off Christmas Dan Dare story entitled The Tannenbaum Caper in which Eagle's Dan Dare and the Daily Express' Jeff Hawke meet for the first time. This fully licensed strip was written by Jeff Hawke creator Sydney Jordan and illustrated by Don Harley.

The other comic strips in the issue include the latest episode of the Dan Dare story Parsecular Tales written and drawn by Tim Booth, the continuing reprint of the Jet Morgan/Journey Into Space strip Shadow Over Britain! from Express Weekly illustrated by Ferdinando Tacconi, a Ron Turner strip The World That Dissolved published for the first time in colour, and the continuing reprint of the Garth story Finality Factor from the Daily Mirror also published in colour for the first time.

Spaceship Away continues its features on little known Dan Dare spin-offs with a piece on the pilot episode for a live action Dan Dare TV series featuring Robert Bathurst as Dan and Geoffrey Hughes as Digby. Other features include an appreciation of artist Ferdinando Tacconi, who passed away in 2006 along with a tribute to him from Jeff Hawke's Sydney Jordan, a career spanning interview with Sydney himself, and a piece on that other 1950s comic strip spaceman Swift Morgan whose adventures were illustrated by Denis McLoughlin.

The centrespread of the issue is a special preview of the new cutaway by Graham Bleathman of the J Series Space Station from the original Dan Dare strip in 1950s Eagle which will be featured in the Dan Dare Spacefleet Operations Manual due to be published by Haynes in 2013.