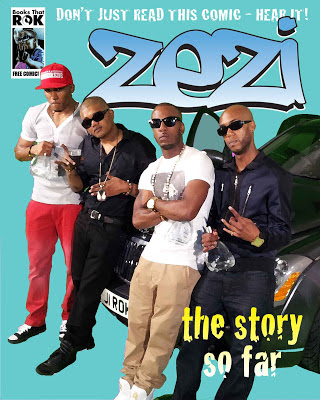 Featuring a full soundtrack that brings the story added life and excitement, find out about ZeZi's rise - the triumphs, the setbacks, the personal tragedy that has shaped their success in different ways.

Birmingham born rapper, singer, song-writer Bc Da Bossman has been involved in writing and producing music since he was very young, crafting his skills with an assist from a music project organised by the band UB40 at Dep Studios Birmingham at just 16. Armed with these skills BC developed himself as an artist, working with some of Birmingham’s most accomplished musicians, rappers and engineers such as the B15 Project, MSI & Asylum and Pato Banton.

But the music really came together with the formation of ZeZi and neither he or fellow band members DeNiro Capo, Durty Sqwurt and P.O.V. have looked back since.

Now, the winners of Radio 1's Freestyle Competition and the New Style Radio Competition have worked with ROK Records to bring their fans this special comic, charting how they came together, the near-tragic shooting that almost put paid to their plans but in the end, steeled them for greatness - and the story of their greatest fan, Taivann, whose life was cruelly cut short.

Working from a story by BC Da Bossman himself, top script writer and novelist Jasper Bark has crafted this bio-comic, drawn by Marc Olivent, coloured by Kirsty Swan and lettered by Jim Campbell.

This free comic includes the option to buy ZeZi's latest single "Spend It All", which will unlock an exclusive ZeZi video within the app.