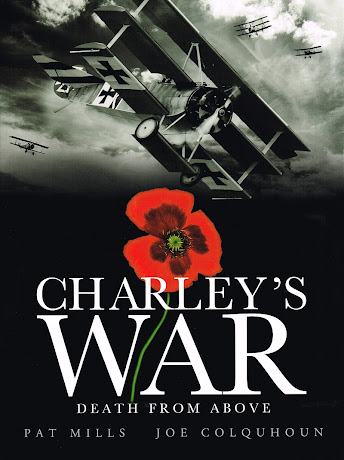 By Pat Mills and Joe Colquhoun

The Book: In this explosive new ninth volume of never-before-collected comic strip, including for the first time reproductions of original artwork from artist Joe Colquhoun's archive, things are looking up for Charley after he meets the love of his life, Kate, a field hospital nurse. But their wedding is destroyed by the roar of destructive Zeppelin Bombers from Berlin!

The Review: Regular readers of downthetubes may be aware that I'm the former editor of this collected work (Books 6 - 8), and therefore may be accused of bias in favour of this ongoing series, collecting perhaps the best World War One comic strip ever published in a British weekly comic - in this case, now Egmont-owned Battle Picture Weekly.

I make no apologies for such bias, because my view on this strip is one echod by many and Titan continue to deliver a stunning reprint of a classic strip - an anti war story originally published in a war comic.

The action for some of this volume swings back once more to the home front after Charley's accident on the front that sees him face court martial. There's a continuation to the stories of Charley's two brothers, Jack and Wilf, the former surviving sea war near the Falklands and being seconded to the secret service; the other, airman Wilf, taking on a giant German bomber attacking London - with tragic results.

Charley also encounters a maniacal Captain Snell (a long term arch enemy) as his developing romance with Kate grows (yes - romance in a boys' war comic! The horror!) and writer Pat Mills throws in some well-aimed barbs at the rich exploiting the war for their own ends, just for good measure. 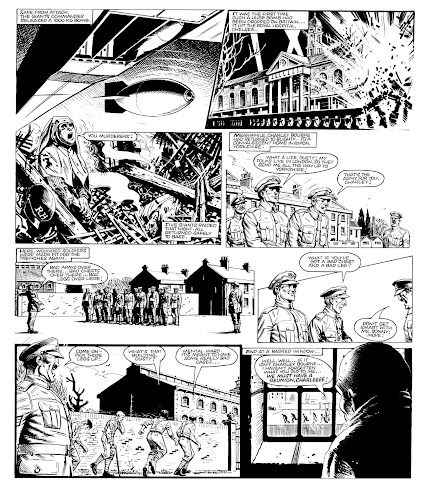 It's a cracking compendium of stories set in the final year of the Great War, with Charley surviving the odds despite the dangers he encounters, the character growing once more as he rallies fellow soldiers in an effort to keep them alive and spared the worst atrocities they might face at the hands not of the enemy but British Army officers.

Throughout, from wartime bombing raids on London to the terror of the western front, the horror of the South Atlantic sea war and even a flashback re-telling of part of the disastrous Gallipoli campaign, Joe Colquhoun's talent as an artist oozes from every page. No subject matter seems a problem for this late, great master comic storyteller, rendering both battle scenes and character moments with equal skill and detail.

Complementing the strip - much of it lovingly scanned from original art courtesy of the Colquhoun estate by Moose Harris - is a fascinating feature on "shell shock" and war poets by Steve White, and writer Pat Mills continuing anecdotal commentary on the background to each episode.

• Egmont are now publishing digital collections of earlier episodes of Charley's War, for iPad and Kobo

• French publisher Delirium are now publishing the strip in French, with pages from the original comic published in colour now appearing in colour in their editions