Rich Johnston and BOOM! Studios to Parody The Avengers 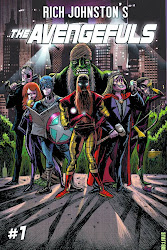 No, we're not talking about Step Up 4…

Each one-shot will be released on one of the four Wednesdays leading up to The Avengers' big screen release on 4th May.

First to be published, on 11th April, is The Avengefuls (Diamond Previews code: FEB120845) drawn by Joshua Covey, followed the next week on 18th April with The Iron Muslim (FEB120849) drawn by Bryan Turner.

The Avengefuls #1: Can The Hoff assemble this rag-tag group together into a team ready to face Earth's greatest threats? Well, he better, because that's why we're making this comic! Written by Rich Johnston (yeah, him again) and drawn by Joshua Covey with a cover by Mark Stafford.

Iron Muslim #1: Trapped in a warzone, Al Stark has an epiphany: "Americans are a superstitious and cowardly lot. I shall become a Muslim!" Al, newly inspired, takes his jihad to New York City, and a showdown with a Freedom Fighter who resembles a certain Caped Crusader… The Iron Muslim is written by Rich Johnston and drawn by Bryan Turner with a cover by Mark Stafford.

(Cue media-hyped outrage from all quarters before anyone's even seen the book...)

Captain American Idol #1: During World War II, Captain American was America's #1 entertainer, thrilling audiences stateside and on the front lines — until a Komikaze attack on his show seemingly took him away forever. But now, a TV talent show looking for fresh blood instead finds the Captain's frozen body. Written by Rich Johnston, drawn by Chris Haley with a cover by Mark Stafford.

ScienTHORlogy #1: Norse (and comic book) legend says Thor is the son of Odin. But what if he was really the spawn of alien overlords who harness volcanoes for ammunition for their intergalactic war and inspire a sci-fi writer to create a church? What if that church was created to deal with the fallout of that war and recruits movie stars to aid their cause? Written by Rich Johnston and drawn by the great Bronze Age talent Michael Netzer (Batman, Marvel Team-Up).

"Rich Johnston takes us on a raucous ride through politics, fanaticism, and the healing power of Hollywood, and no one is spared," said Ross Richie, Founder and Chief Executive Officer of BOOM! Studios. "Expect his typical irreverent personality, along with a big dollop of black humour and some scathing satire. This one's not for the faint of heart!"