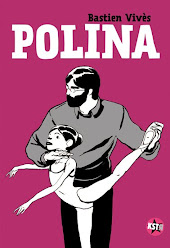 Bastien Vivès' Polina (due to be published by Jonathan Cape in the UK in June 2013) was awarded l'Association des critiques de Bandes Dessinées at this year's Angoulême International Comics Festival.

Polina recounts the joys and torments of a young Russian ballerina in the world of classical and contemporary ballet.

Vivès' A Taste of Chlorine was previously published to much critical acclaim in the UK. The Observer described it as "extraordinarily beautiful" and the Independent wrote "Every once in a while, a graphic novel comes along that warrants the kind of attention more typically bestowed upon the likes of the Booker shortlist. Bastien Vivès's A Taste of Chlorine is one such book."

In other good news for Cape, Guy Delisle's Jerusalem (to be published in August 2012) was also awarded 'Best Album' award.

The Angoulême International Comics Festival is the largest in Europe. 11 prizes known as the "Fauves d'Angoulême" were awarded in Angoulême on Sunday 29th January 2012, the last day of the 39th edition of the festival. They reward comic books published in French between December 2010 and November 2011; 58 books were shortlisted this year.